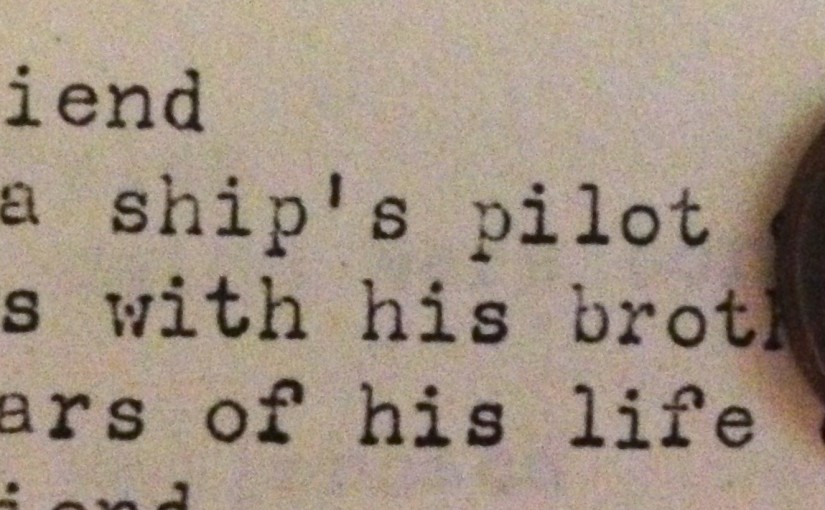 She married a crippled man who later disappeared. Of this union were born 7 children. They resided in Norwalk and little is known of them.

This is all I know of Mary Tyler Meyers, one of my maternal great-grandfather’s nine siblings. Except for the bare dates of her birth and death, Mary Tyler Meyers exists just in these sentences, typed by someone four decades ago to preserve the Tyler history.

I don’t know who the reporter of this biography was, nor who the speaker was. These brief notes were part of a stack of papers and photos that a cousin dug up for me – showing no date or author. The sentences have the crispness of a librarian’s catalog, putting order to the mess that is memory.

But the drama tucked into those three short sentences – argggh! Just enough to be wildly frustrating.

Why was he crippled – polio, an accident? What did she love about him? Did they keep to themselves to avoid the pitying and not-pitying stares – is that why “little is known of them”? What did he do for a living and how did he manage to “disappear”?

Her parents’ story is even more dramatic, but they, too, are summed up in two sentences, with more words given to their house than to the people who built it:

Benjamin Tyler and Christine Kessler Tyler immigrated to America in 1829, settled on Hettel Road, Peru Twp. The home they built was bought by Jacob Hettel and was later deserted and used as a sheep barn. In the 1960s it was repaired and remodeled and is now occupied by John Miller. Benjamin died of injuries resulting from a horse accident at Standardsburg a short distance from his house.

In 1829, Peru Township was barely more than a swampy forest. Hettel Road was near an area called Sauwald (pig forest, in German) because it was filled with wild boars. Immigrating to this unsettled, unfamiliar place and building a house was an accomplishment I might compare to me moving to Central America and carving out a living in the depths of a tropical rainforest.

How did they feel when they rode past that house later and saw it was a sheep barn? And what caused that horse accident – leaving Christine to make her way as a widow for 23 years?

Two of Mary’s brothers, Andrew and Peter, are dispensed with in equally swift terms:

Peter Tyler was a bachelor who resided most of his life with Mary Tyler Meyers. He is buried on the Louis Tyler lot at the Monroeville Catholic Cemetery.

Andrew Tyler started a shoe repair store which was later purchased by his brother Louis and converted to a dry goods store. He was severely afflicted with arthritis and walked on his knees for many years. He had two children.

I had read Andrew’s obit, which also referred to him being known as the man who walked on his knees, and puzzled over that – was he an amputee?

Now I learn it was arthritis, and I know the treatments those days were not much more than ointments. If it was less painful to walk on your knees than upright, that tells you something about the pain of the arthritis and the ineffectiveness of the treatments.

But it doesn’t tell you what Andrew was like. Did he have a sense of humor? Did he like repairing shoes? How did the world look from that on-his-knees perspective?

And then there is Oliver Friend, the nephew of my great-grandmother. I have a vague memory of my mother and her sister going to clean out his house in Cleveland when he died; Mom came home with an antique tea cart, which she had refurbished. Much of his belongings, though, were junk.

He was a ship’s pilot on the Great Lakes and later joined the wholesale business with his brother and step-father. He was a bachelor who spent many years of his life caring for his mother and sister.

I imagine him spending dull evenings in a parlor with his mother and sister, hearing the wind of a nor’easter and wishing he were out on fickle Lake Erie.

Or did he enjoy the solid ground, the predictability of it all? We will never know.

The casualness of these summations takes my breath away. An entire life, in just two or three sentences. Judge, jury, and executioner: the historian.

I’ve played that tripled role myself, though, as a journalist.

I summarized people, places and events in a sentence or two. We pride ourselves on that skill, to pick out only the relevant details and tell them succinctly.

Now I am mere decades – or, who knows, days? – from having my own life swept into a little pile of two or three sentences.

And only now, reading these brief lives, do I feel the full terror of the looming journalist’s pen.

Today’s penny is from 1971, the year Oliver Friend died.