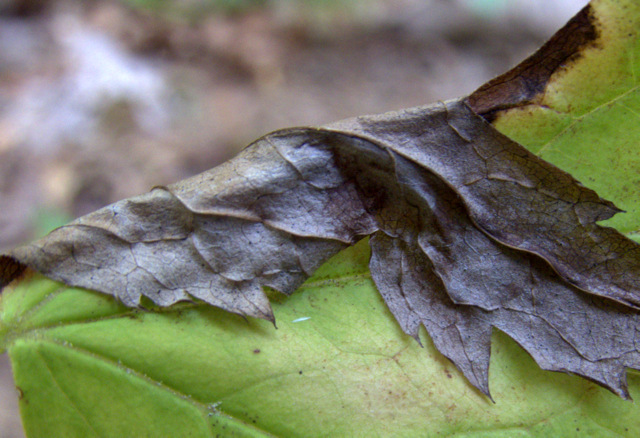 The first summer after I transplanted a black cohosh to the hillside above the cabin, I was so worried about its need for shade that I suspended a baby blanket over it with bungee cords.

Then halfway through the summer I realized that I was also keeping some of the rain from reaching the plant, and took the blanket down.

I had to let go of my baby. Booger Hollow is no garden spot. If the cohosh were going to survive in the forest, it would have to do so on its own.

The next year, I transplanted more black cohosh. I dragged the hose up to fill the water can and planted Aqua Globes, these pretty blown-glass containers that will supplement the water during hot times. Didn’t help. The transplants died.

In the fall of 2014, I brought up six more black cohosh. I hauled water up by hand in a watering can a couple times. You already know the story of the red buckeyes.

The time came when I had to let go of the new cohosh, too. One of them didn’t make it through the winter of 2014, and another one died last winter.

I ride the tides of emotion with every visit to the cabin. I moan when the deer eat the tender green shoots of Solomon’s Seal leaves every spring, when the bloodroot puts up flowers that never open, and when the blue cohosh fails to bloom or the red buckeye failed to thrive.

I cling to my surety that they belong in the forest and they will adapt and survive.

I have transplanted to Booger Hollow only native species that ought to be here but, from decades of overharvesting and crude, unknowing development, have been long gone from the acreage surrounding the cabin: black cohosh, blue cohosh, bloodroot, Solomon’s Seal, sweet gum, sassafras, passionflower, yellow root, bottle brush buckeye and red buckeye. I have ambitions of adding others, but I have not had time to work with the soil and continue testing pH and adding natural soil boosters like lime and compost.

We haven’t been here since Memorial Day, more than three months, and this is the hottest summer in recorded weather history. I was almost afraid to survey the damage.

I had the sensation of moving through the future apocalyptic bad times, when climate change has left us with few plants and overrun with insects.

Of the five remaining black cohosh, two were completely fried. They’d managed to put up a stem and leaves, but those leaves were brown and dead. The other three black cohosh plants were small and gasping for water.

Not one of them had put up a flower stalk. So, no seeds to scatter this year.

The blue cohosh, which also grows from its thick root, was a bare brown stalk. Looks like the tender leaves were eaten by a drought-thirsty animal, then the rest of the plant died. Not sure if it will come back.

The Solomon’s Seal was, of course, nowhere to be found. No trace of the bloodroot either – although healthy plants would still have visible if yellowing leaves up through the first frost.

The sweet gum hadn’t grown a centimeter, but it was alive, at least.

The red buckeyes had already shed their leaves. Just a couple of brown leaves still clung to them with frail grasp.

The yellow root and the bottle brush seemed OK, though they hadn’t grown either.

The passionflower was something of a joke. At the house, my passionflower has taken the course I encouraged and is beginning to take over the yard. Here at the cabin, the passionflower has barely put out a couple of tiny shoots with little baby leaves – looks like it happened just in the past few days since the weather cooled.

Probably a good thing. I don’t want any drunken yellow jackets – they seem to get bigger and nastier every year as it is.

Meanwhile, bag worms have completely taken over a small maple and are now encroaching on an adjoining tree. The fuzzy greytone caterpillars are everywhere, even trying to get into the house. The tree looks like a goner, but I know trees can recover from these invasions.

I talked to the plants, as I always do. This time, instead of praise and delight, I tried to give them a pep talk.

It’s been a bad year. Tough for everyone. Record temps. Gotta develop some resistance to the drought, baby. You can survive.

It’ll be better next year.

Today’s penny is a 2014, the year I transplanted the six black cohosh. Transform or die.

2 thoughts on “What the drought hath wrought”