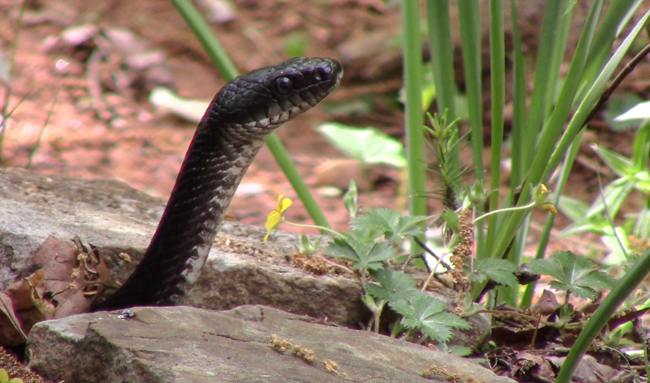 I stood at the door of the cabin and said to myself, “Huh, look at that branch sticking up out of the ground. It looks just like a snake’s head.”

The branch moved. It was a black snake, sticking his head out of his hole.

The snake seemed to hold absolutely concrete-still. Made my neck hurt just to look at him.

I set up my video cam and shot some time lapse of him. He did move, more than you’d think if you were just watching him straight on. He seemed to be smelling the air, not just looking around.

He finally emerged from the hole and crossed the driveway, slipping away in the green foliage on the bank. I remembered that we’d seen a black snake just like him at the cabin a few years ago.

Georgia has several kinds of black snakes, but this one is a rat snake, Elaphe obsoleta obsoleta. They are usually 3 to 6 feet in length, though they can be longer. They’re not poisonous.

Today a neighbor posted a photo of a black snake lying on the road, not too far from my house. It was strangely kinked, and you might think it had been run over.

I learned then that the kinked posture meant the snake was frightened. Another neighbor said that when she sees them on the road like this, she picks them up and moves them off the road.

What a good Samaritan! I don’t know if I’d have the nerve to do that, but next time I see one that way, I’ll try to nudge it off the road.

Some adults attempt to protect themselves. They coil their body and vibrate their tails in dead leaves to simulate a rattle. If the snakes continue to be provoked, they will strike. Rat snakes produce a foul-smelling musk and release it on the predator if they are picked up, spreading the musk around with their tail. The musk acts as a deterrent.

Another neighbor recently posted a photo of a king snake, also a black snake commonly found in the South, with the caption “The only good snake is a dead snake.” A number of us objected to this sweeping indictment. I don’t love snakes, but they’re part of the ecosystem just like the cute bear cubs and the pretty warblers.

Then I learned that king snakes will kill copperheads. Yes. Quite a wrestling match. Also a good reason not to kill a king snake.

I went on a hunt to see what else I could learn about the rat snake. The more I learn about an animal, the more I am able to defend it.

The rat snake will only rarely kill a copperhead. Rat snakes can actually hibernate in a den with copperheads.

Rat snakes are constrictors. They can eat frogs, lizards, mice, squirrels … and birds. Known to raid chicken houses, in fact.

They are also great climbers – and they eat bird eggs. As Today’s Homeowner notes, “They can climb trees; and, if you don’t protect your bird houses with baffles, will break your heart by invading the nests.”

This is why the wren was cautious. Maybe she smelled that black rat snake. Or saw some sign – a pattern in the leaves, a particular kind of hole in the ground. But she knew. And she didn’t want that nest.

Nature isn’t some sweet little old lady in a gauzy dress. She is a force that holds life and death in equal parts.

We’ll not harass the rat snake. We need him for mouse control.