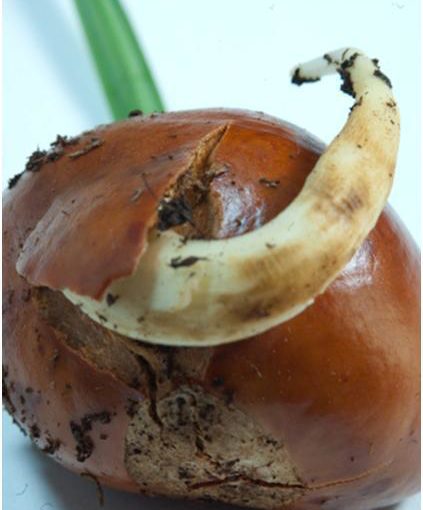 This story begins seven years ago, with an act of faith.

“I’m going to plant that red buckeye seed today,” I told Tom. Caught in my voice was that thin blade of iron resolution usually reserved for the worst tasks, like sweeping mounds of wet leaves off the decks.

I had put it off for two days. My mentor, forester Jim Smith, had given me the seed. He has devoted himself to propagating native plants in Georgia, and he loves red buckeyes.

I knew exactly where I wanted to plant this seed, and the sun was out, a perfect day for planting. I like digging in the dirt.

But, I procrastinated because I am inept. I don’t actually know how to plant a tree seed. I’m terrible with plants and I have never grown a tree other than an indoor ficus, which is nearly indestructible.

I shouldered my shovel and picked up the bag with the seed. It was wrapped in wet paper towel, a bit of soil still clinging to it from the nursery where Jim had let it spend the winter with its brethren. A really large seed, and already with a thick sprout cracking the shell of protection. The wind had a pretty good gust-head going, just enough to keep your coat firmly zipped. Somewhere in the hawk heights, a heavy half-fallen branch rubbed against a nearby trunk, squeaking like a rusty door hinge. The soil mooshed underfoot with yesterday’s rains, and a woodpecker trilled.

I stood for a moment to appreciate winter’s leafless view of the half-dozen mountains that surround us. I love my adopted home of North Georgia, and I was so glad to plant a seed that would become one of its trees.

With any luck, the tree will outlive me by decades. Hummingbirds will sup from its flowers long after no one in these mountains knows my name.

The Southern Appalachians are among the oldest mountains on the planet, and their softened aged peaks absorb my troubles like a toothless great-grandma.

Trees comfort me, too. At our family home in Ohio where I grew up, big maples shaded the house, a huge pine tree took on Christmas lights every year, a magnolia bloomed every June, weeping willows lined the creek bank. All around our house were deep woods, where I climbed and played for many hours.

I recalled with a smile the story that my sister Ann tells:

“One day after I had left home, I was visiting Mom and Dad, sitting on the patio. And as I soaked in the beauty of the place, I noticed how huge all of the maple trees were, providing lots of lovely shade.

“Then I remembered being young and watching Dad plant this little stalk with a few leaves sticking on it. Dad explained that in ten or fifteen years it would be a beautiful big tree. And I thought, ‘Ten or fifteen years! Why bother?’

“But there I was, twenty years later, and there was this big beautiful tree, just like he said, sitting in front of the house that they had made from their dreams.”

It is an act of faith, to plant a tree.

The spot I had in mind for the seed is safely away from cars but still prominently next to the street, on the highest area of our lot. I imagined giving directions in a few years: “We have a red buckeye right out front – you can’t miss it.”

But as I began to clear the dead leaves and small stones from the area, I saw a root protruding. Two or three fingers thick, and not at the foot of any big trees, so it must have extended at least a dozen feet from the trunk. Several other thinner roots stuck out a few inches further in.

Would my little red buckeye be throttled before it even has a chance to take root?

I dropped to my knees and began to scour the soil with my hands. Dozens of steel-hard nuts from that oak, chunks of glinting mica and white marble, and more roots, hairy and twisted…. Suddenly this plot of land looked like a minefield for my innocent seed. A hostile environment… and the weeds hadn’t even sprouted yet.

I started worrying like I was pregnant. Where would it be safe? From cold, wind, other trees, animals, cars…? I paced around the front.

Our yard is not really a yard, to speak of – our community does not have lawns, only woods and whatever can pass as wilderness landscaping, with native plants only. Most of our lot slopes steeply, and I feared the red buckeye would wash away in the next heavy rain.

Anxieties piled on. Putting this baby seed under the soil – burying it in the dark dirt. Buried alive! “Won’t it be scared??” I think childishly.

It’s only February… and even though we’re in the South, snow and ice can still hit suddenly. Well, Jim Smith had assured me that it would be fine even if we had a snow and a freeze yet.

Deer devour great swatches of young tender sprouts and leaves… but, they don’t eat red buckeye, probably because it’s toxic. The seed is a tough thing, clearly able to take care of itself.

I noticed, then, the ornately budded moss that carpets the chunk of white marble. Life persists.

I dug the hole, cradled the seed into it, and held my hands over it in a Reiki prayer. The wind picked up, making dead leaves dance, and a little circle of them gathered around the hole.

I scooped up the clods of red dirt, patted it around the seed, smoothed it over, and hoped for the best.

I watched and waited. Weeks went by. No sign of the seedling.