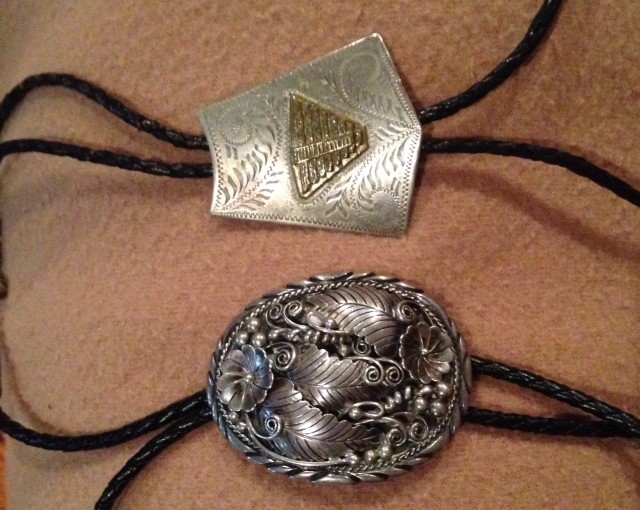 Dad didn’t have much chance to acquire a taste for expensive jewelry. He was an Ohio farmer boy in a poor German Catholic family, one of eight kids being raised by a widow during the Depression.

But he liked jewelry better than Mom, I think. Mom seemed to feel that jewelry was showing off and pretentious.

Dad bought her a beautiful watch for their 25th wedding anniversary, a very slim, classic design with a plain black band, adorned with 10 small diamonds.

He had me go with him to the jewelry store when he bought it; I think he wanted an endorsement. I was only 11 years old, and I found the watch dazzling.

He had it engraved on the back to say “All my love, Walt”. I seem to remember that in 1960s dollars it was $500. He would have worked a good many hours on a cold construction site to earn that much.

My mother almost never wore it. She said it was too fussy. I couldn’t comprehend how she could say that about such a beautiful watch, and even more how she could hurt my dad’s feelings like that.

Dad later got a nice watch from his employer for 36 years of service, and it also had small diamonds on the face. He certainly didn’t hesitate to wear it and he would never have said it was fussy.

He was a very plain man, and not at all pretentious. I think he loved beauty.

When they retired and moved to Arizona, he became enamored of silver and turquoise jewelry that is common in the Southwest and learned to make it. He had a big silver ring studded with small turquoise stones, and he wore it quite frequently, whenever they were going out. He made Mom a ring with a single large turquoise, and she liked that.

Dad also had several square dancing ties that I think of as his necklaces. I have two of them – pictured above.

I love the elaborate design on the silver one. It’s one of my most treasured pieces of jewelry. The other one, with a representation of an Aztec temple, I wear when I want a little something but not too fancy.

Dad made rings out of old silver spoons for us girls and Mom when that was the rage.  He loved us, of course, but I wonder now if he really did it to please himself. It gave him a creative outlet.

Maybe he was even artistic, but just never had a way to express it because he was a poor farmer boy.

Today’s penny is a 1971, the year of my parent’s 25th wedding anniversary. It’s a D – for diamond. It’s sitting on a chunk of amethyst that Dad bought for a piece that I’d asked him for – but he didn’t have a chance to finish it.