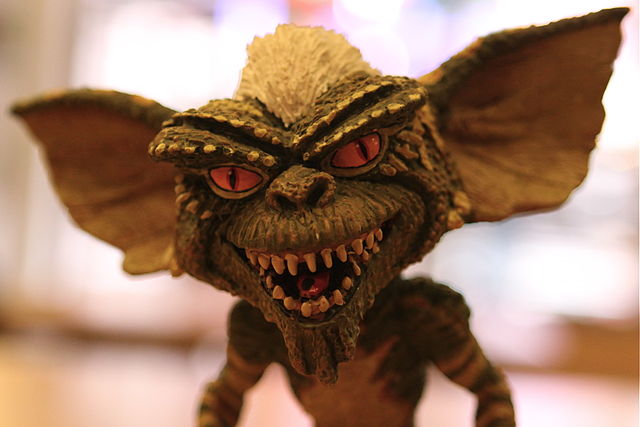 With all the problems I’ve had in the basement, I was starting to wonder if I had a gremlin down there.

I am not referring to the ‘70s AMC car that was as ugly as the decade it was born.

I’m talking about those demonic creatures unleashed on the American public in the 1984 movie Gremlins. They sprang from an adorable furry pet and took over, wreaking havoc with their mad consumption and need to wickedly entertain themselves, destroying most everything in the process.

They bore a remarkable resemblance to humans.

We watched Gremlins last night. I hadn’t seen it since it first came out, and so didn’t remember much of it other than the gorey, hilarious kitchen madwoman scene (a blender is involved).

You understand what’s happening on the first run through. You laugh, you repeat some of the good lines, and for months afterward you blame gremlins for anything bad that happens.

As the narrator concludes,

So if your air conditioner goes on the fritz or your washing machine blows up or your video recorder conks out; before you call the repairman turn on all the lights, check all the closets and cupboards, look under all the beds, ’cause you never can tell there just might be a gremlin in your house.

We had such a good time watching it last night that we followed up tonight with Ghostbusters 2, circa 1989. I had somehow never seen it, even though I (and millions of other Americans) loved the first Ghostbusters.

Bill Murray and Dan Aykroyd in their prime, Sigourney Weaver at her beautiful best. Funny plot, funny writing, and lots of wild special effects. What’s not to love?

Set in New York, the movie has the obligatory shots of the Manhattan skyline. And there they are: the Twin Towers.

Just when you think you’re over something, you see a photo and your heart breaks all over again.

How innocent we were. Watching these movies, it washes over you.

Romances are just man plus woman equals love. Heroes must endure skepticism and ridicule, but then they gather their resources and strike down great demons.

No one has to come back from Iraq with no legs.

In Ghostbusters, the rudeness of New Yorkers and the negative vibe of the city are wrapped into the physical form of an underground river of slime and an evil 16th century tyrant.

A mere 27 years ago, you could do a movie where New York’s biggest problem was that people needed to be nicer to each other.

Now we contemplate holes in the skyline and try to make monstrous enemies of our fellow citizens.

Who you gonna call?

Today’s penny is a 1989, the year that Ghostbusters 2 was released.

The featured image of the gremlin is from Wikimedia, credited here.