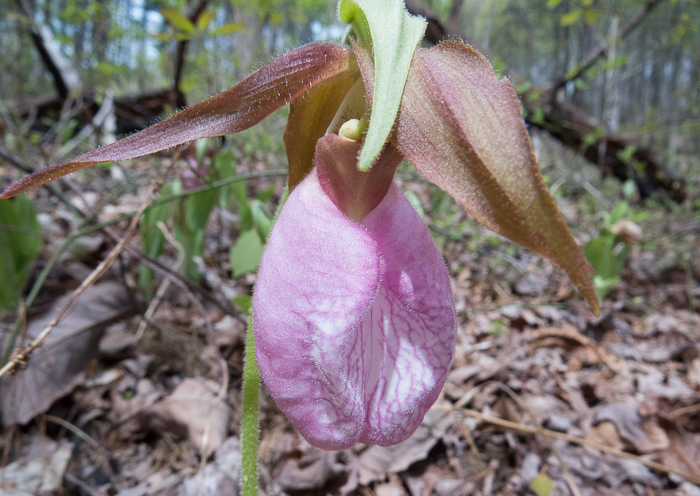 All along the road and trail, the ground was covered with black char. No green anywhere.

Late one April, two months after the burn, I was hiking along a trail and saw green life coming back. Violets, iris, pussytoes, wild ginger, trillium were springing up.

And then, the two rounded leaves with a single, large, pink blossom on a stalk in between. Lady slippers!

This is a flower that I’d previously only seen in very small groups, perhaps three or four plants, and even then only rarely.

Now, in one patch of burnt earth, I counted more than 100 lady slippers. And later that weekend, in another patch, more than 90.

Fires, I learned, are thought to help lady slippers because they clear out undergrowth, so more light makes it to the forest floor.

I returned to the lady slipper patches several times that summer, watching anxiously to see how many of the flowers got pollinated and produced fruit. Only eight seed pods appeared in the larger patch.

The next year, only two seed pods.

Today, I took a five-mile hike through the forest. And there they were again!

I didn’t count, but there were dozens of lady slippers in the same patch. A cause for great rejoicing. This flower, once plentiful, was overharvested because of its medicinal uses – for depression, anxiety, and muscle spasms.  It does not have an easy life to begin with.

Like other forest orchids it depends on a particular fungus in the soil.

Lady slipper seeds are smaller than grains of salt, and unlike most seeds they don’t carry with them the nutrients they need to germinate. Instead, they are cast about by the wind and dependent on fate to land in healthy soil where a particular fungus is growing.

Producing seeds is even more difficult. There’s a reason why typically only 5 percent of the flowers are pollinated and produce seed pods: They play a game with bees, and often lose.

The succinct description from the Forest Service:

Bees are lured into the flower pouch through the front slit, attracted by the flower’s bright color and sweet scent. Once inside, the bees find no reward, and discover that they are trapped, with only one point of escape. Inside the pouch, there are hairs that lead to a pair of exit openings, one beneath each pollen mass. The bee must pass under the stigma, so if it bears any pollen from a visit to another flower, it will be deposited before picking up a fresh load on the way out.

The mystery is why any bee, once fooled and trapped by the flower only to find no nectar, would ever go to a second lady slipper and complete the pollination cycle.

Juliet Blankespoor, founder of the Chestnut School of Herbal Medicine in Asheville, N.C., figured it out through sheer imagination. For her description of the process, told from the bee’s point of view, read this wonderful account .

Here’s a video of a bee struggling its way out of a lady slipper:

For all of its reproductive problems, the lady slipper has a prominent feature that there’s no avoiding: These delicate, rare flowers look like testicles. They’re rounded and have obvious veins.

A lady slipper is an orchid. The word “orchis” is Greek for testicles.

Today’s penny is a 2013, the year of the prescribed burn that released the lady slippers.