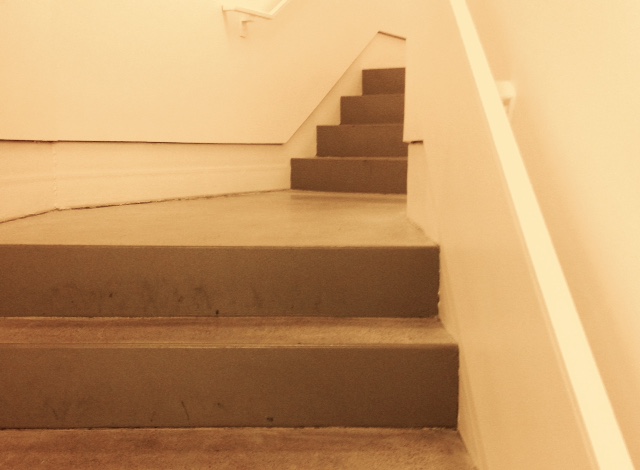 I mean that he walked.

He hoisted himself up off the bed, using a walker. The two assistants hovered, advised and guided, but the balance, coordination and movement were all Tom’s.

The attending neurologist and team of six residents happened to be making the rounds, so they watched. Tom barely noticed them, his concentration was so intense.

As I saw him stand up straight, I could almost hear the internal drill sergeant commanding him. He focused straight ahead and pulled up his head and chest.

Then he lifted his leg and put one foot ahead of the other.

Tears in my eyes. Last Thursday he couldn’t move his right side.

Until this moment, I hadn’t allowed myself to think about what he is facing. I concentrated on getting him the best possible care, arranging his pillows, shooing people out of the room when he was sleeping, asking questions to make sure that I understood all the diagnoses of his health, ordering his food and feeding him, demanding things he needed.

For him, it has been all about moving his right side again.

Every step was a huge effort.

His right foot wants to turn on its side with each step because the muscles in his ankle aren’t listening to his brain.

He has to give very deliberate instructions to the muscles in his right leg in order to lift it and move it ahead.

For now, he has to lock his knee, which is counter to everything he’s ever learned about the correct way to stride.

I looked around the room as he walked that ten feet across it. The residents were amazed; jaws literally dropped.

Tom stopped at the end of the room. He stood for a moment, resting. A general murmur and exclamations of praise went through the audience.

Then he walked back.

The attending neurologist was impressed, too.

She told Tom, “With so much progress in a week, your trajectory is this,” and she drew an upward line at about a 75 degree angle.

“Whereas normal progress might be this” and she drew a 30 degree angle.

I appreciated her attempt to graph his prognosis, especially since Tom is a data scientist.

For me it was simpler: He walked.

Today’s penny is a 1964, a very special year indeed – when Tom walked for the first time.