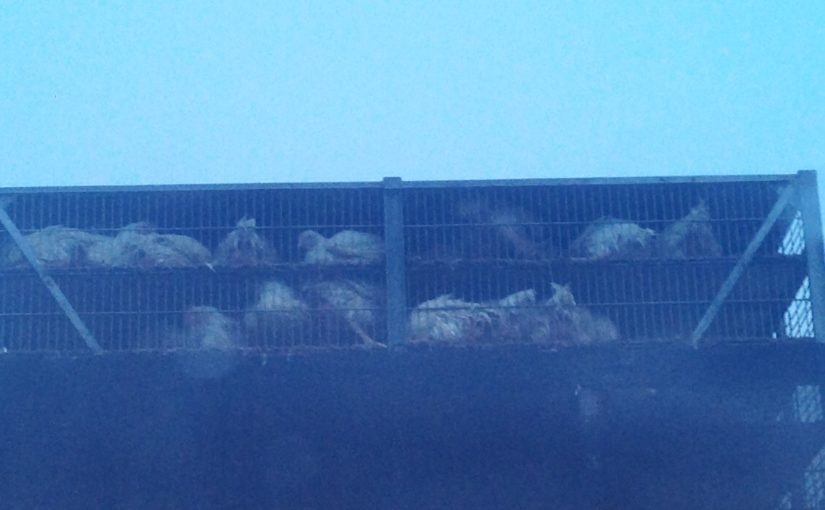 There was a hard rain falling, and I was driving to Atlanta. Got behind a truck. A big semi.

In the rain, it wasn’t clear at first what the cargo was.

Then I saw it was chickens. Live chickens.

They were stuck in there every which way. Didn’t look like they had room to stand up all the way, and they were crammed next to each other. A few looked like they were fighting.

It doesn’t take much imagination to figure out that animals being transported like this get pretty stressed. And animals, like humans, get a flow of chemicals through their system when they’re stressed.

I always buy organic meat, mostly because I don’t like the idea of eating any animal that’s been injected with antibiotics and hormones for its whole short life. I buy local, free-range chicken when I can because it’s more humane. Of course, they still die in the end – but at least they’ve had a decent life, right?

My friend Maureen calls this “one bad day” meat.

But for all I know, these chickens on the truck could have been “organic” chickens. They have to get transported to be slaughtered and processed, right? Seems like this stressful trip, and the slaughterhouse itself, could undo all the good from having had a great chicken life. Maybe they have more than one bad day.

When I confront this, I have to think again about my choice to eat animals.

I view meat-eating as part of the food chain. We’re on top because we evolved that way, and we eat meat.

Nature is vicious, and birds in the wild live a damn hard life, too.

But still: Animals suffer in order to feed us.

Today’s penny is a 2014, the year that the 40th anniversary edition of the Moosewood Cookbook was published. That was my first vegetarian cookbook.