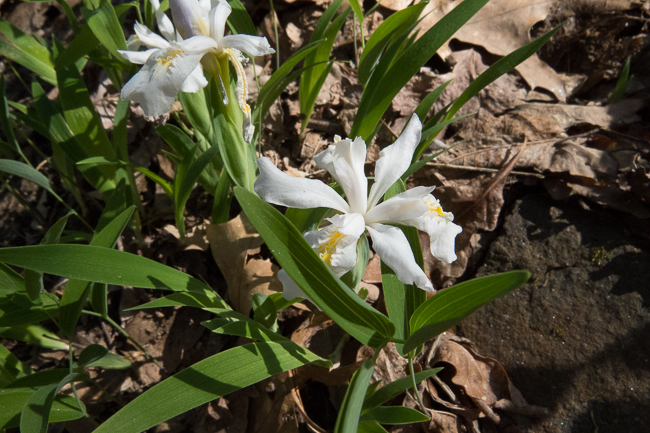 Every year, there are a few species that seem to have an especially big burst of growth. This year, the crested iris is everywhere, in big patches, cascading down every road bank and even in my yard.

So, as we traveled along the Chattahoochee National Forest roads yesterday, I wasn’t surprised to see lots of iris. Then there was a patch that grabbed me by the eyeballs.

He’s used to these outbursts, especially in spring. He graciously backed up to where I was pointing.

My brain had caught a pattern that wasn’t what it expected. It was another patch of irises – but they were white.

In my nine Appalachian springs, I’ve never before seen a white crested iris. Could they be some sort of mutation? Can there be albino flowers? Well, apparently the white crested iris (Iris cristata alba) is “not as common or vigorous,” according to one gardening center.

But another center, selling the white iris for $9 apiece, said it’s “a generous spreader.” I have my doubts.

In my next life, I’ll find the time to learn why the white iris is the way it is.

For this lifetime, it’s enough to simply be able to see it. Even once.

Today’s penny is a 1980. That year was the 800th anniversary of the coronation of Phillip II, one of the earliest kings who used the fleur de lis in his seal. The fleur de lis is believed to be based on an iris or other member of their family.

The iris is the state flower of Tennessee.