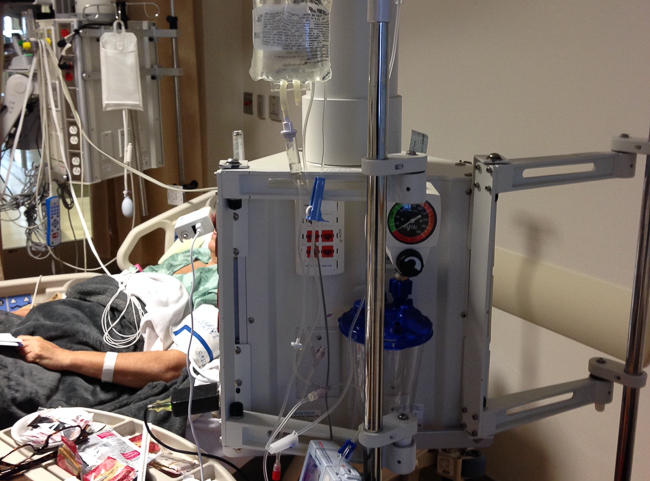 How’s a person supposed to get any sleep around here?

The ICU is just plain noisy. Every apparatus connected to me, and there are a half-dozen, has an alarm.

And those alarms go off day and night, whether there’s something to be alarmed about or not.

Generally the ICU staff themselves are quiet (though I did once have to ask my nurse to tell his colleagues to shut up, at 2 a.m.). They know that a brain recovering from surgery really, really needs sleep.

But they don’t always seem to hear the alarms. Or at least, they don’t respond to them as quickly as my jangled brain would like.

Since everyone in the ICU is potentially at death’s door every moment, the alarms are set to high sensitivity. That means no “false negatives,” a silent device when there IS a problem.

The abundance of false positives in ICUs is itself a problem. It’s the old “crying wolf” problem: If the alarm is usually a false one, the staff grows less and less responsive.

Then when it’s a true positive, a patient’s real problem is ignored.

Just before my aneurysm, I was studying a similar problem, in a data analysis class. This problem in its various forms has been studied by mathematicians since at least World War II, who put it into a four-box matrix called the “confusion matrix.”

They came up with a way to determine the most optimal response level – to avoid missing any alarms that would result in fatalities, but to not respond to the alarms which were simply a waste of time.

The problem is that the nurses HAVE to respond to all alarms. Because if they ignore them, the patients will never get any sleep and will all go beserk.

Which is not good for healing a brain after surgery.