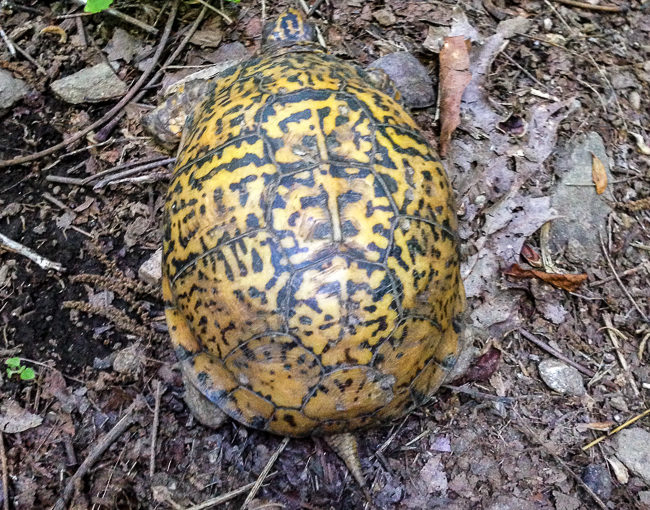 A week ago, I tackled the steep mountain trail that goes to about 3,000 feet, and was delighted that I did the uphill half in 53 minutes.

Wanted to do a little better this time. Another objective was to capture a photo of the flower that I was unsure of last week.

Today it was clear:

When the heat rises in the mountains, you can follow its path in the blossoms. All the skullcap was gone, and the cinnamon fern has faded. They thrived at the lower elevations, but it’s already been in the 90s.

There were a few fire pink lingering at the top, and the sundrops and spiderwort were also still blooming.

I’m remembering my mantra: One thing at a time.

Gonna keep on climbin’ till I’ve reached the highest ground

I felt good, and didn’t need to stop much for breath. I took the traverses steadily.

In the middle of the third traverse, a young turtle was in the trail. He didn’t duck into his shell when I spoke to him: “Bro!”

Made it to the top in 48 minutes. Less than seven months after brain surgery.

On my way back down, the turtle was gone. Guess he reached his higher ground.

Today’s penny is a 2015, because my time today was as good as last year’s at this time.