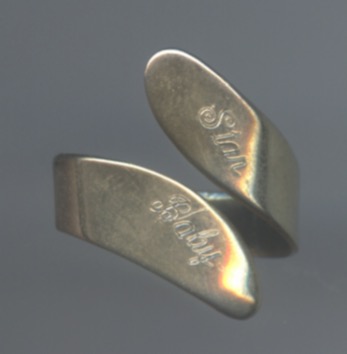 You know when you’re little and you have a secret friend? Someone you made up but you tell everyone about them, play with their invisible self while talking to them, and insist that this friend is real?

My sisters tell me I had a “secret friend” named Patty. At least I think that’s the name. I don’t remember any of it. Maybe my sisters made it up.

When I was in high school I had a secret boyfriend named Ron. I made him up. I bought myself a ring and had it engraved with “Star Baby,” [pictured above, I still have it]. That was a Guess Who song title.

I told my best friend all about my sexual adventures with Ron, who gave me the Star Baby ring. I was still a virgin, but I desperately wanted a boyfriend.

I don’t have any secret friends any more. My friends are all real people. Most of the time.

But I still have a secret identity. I secretly believe I’m an artist.

Tonight I started recrafting my website to fit my secret identity. One problem: The website has my name on it. LisaSchnellinger.com

Today’s penny is a 1974. Songfacts.com says, “The Chicago radio station WLS, which gave “Star Baby” heavy airplay, ranked the song as the 37th most popular hit of 1974.”

2 thoughts on “The secret friend”