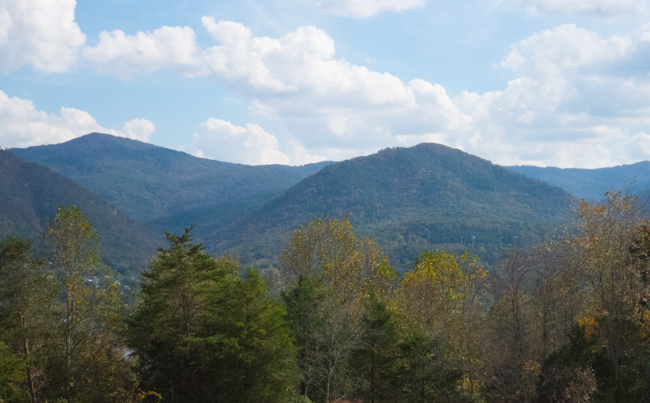 The land came to us in waves of mountains, crests of forests, embracing us as we moved across it.

Although we were on interstate freeways, the ride through the Appalachians was scenic. Plenty to rest my eyes, in glimpses from the 75 mph watchfulness. Plenty for Tom to roam with his eyes and mind – familiar routes from his own youth.

Every road trip I’ve ever taken in the United States has helped me to understand our country a little better.

Driving is the way I’ve developed a visceral sense of how big the U.S. is. So much land that is still undeveloped, so much wealth in natural resources, so much space for people to sprawl across. And all so beautiful.

Geography is destiny. Because the U.S. is so huge and so rich in resources, we had room to take in immigrants from every nation and room to accommodate every kind of belief and lifestyle.

In America, if you don’t like your neighbors or your family or your opportunities, you just move somewhere else. Mobility allows us to live up to our potential as individuals.

It isn’t always that simple, of course. If you were a single woman in a small rural town in the early ’60s and you wanted to have a life of travel and adventure, you didn’t just leave home unless it was for college or a husband.

That’s the context in which I see Tom’s birth mother.

She was in 5th grade when Richard and his sisters arrived in her town, from England. Their school was tiny – less than 150 kids in five upper grades – and the foreign newcomers surely caught her attention. Richard was a crossing guard; maybe he stopped cars for her as she walked to school.

After two years, Richard’s family moved to a bigger town nearby, but she easily could have kept track of them. Richard’s sisters ran a dress shop and traveled to New York for the runway shows; that, too, offered her a window on a larger and more exotic world far from the Appalachians.

She was in college in 1963. It was an accomplishment for a woman in the early 1960s – less than one-third of the women who were her age that year enrolled in college.

The cost of her education must have involved some sacrifice for her working class family, and that had to be part of why they were so disappointed in her for getting pregnant.

She told the social worker at the time that “she had known your birth father for awhile and he meant a lot to her,” the adoption records note.

Perhaps she secretly hoped that Richard would marry her. As his wife, she’d still get away from home, following his Air Force career.

But that wasn’t to be. By the time she signed the papers relinquishing rights to her child, on December 30, 1963, she and Richard “were not very close anymore.”

At the end of today, when Tom and I finally arrived at the hotel, we were exhausted from our journey. But we had passed the town where his birth mother was born, where she met Richard.

Tomorrow, we will meet him.

8 thoughts on “Big and beautiful”