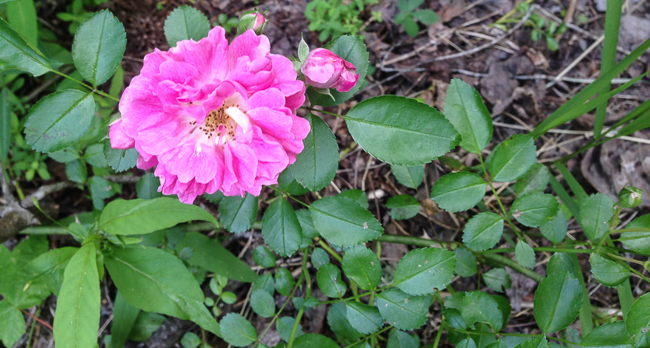 I was huffing along the trail, trying to finish my eight-plus miles in three and half hours. Looked like I’d make it.

I didn’t. Because of the pink.

No, it wasn’t FIRE PINK. It was the pink of wild roses.

A lot of them. Where I’d never seen them before. It’s as though they sprang up from nowhere. I was just on this trail a few weeks ago, and I’ve hiked it many times in the past five years. Never saw these bushes of wild roses before. And further down, another patch.

Every time I see a new plant, I wonder why I haven’t seen it before.

Is it because I just never happened to be in this spot at the exact time of the year when this particular plant is growing? But I’ve been in North Georgia for nine years, and hiked the same trails over and over…

Was I not paying close enough attention before? Well, that may be true for some of the diminutive white flowers, but there’s no missing wild roses with their bright pink against the green.

Or is it possible that they really did just move into the neighborhood this year? All at once?

Or was it just the right time for me to see a wild rose?

Today’s penny is a 1970. That’s the year that Chauncey Olcott, the famous Irish-American tenor who wrote the song My Wild Irish Rose, was inducted posthumously into the Songwriters Hall of Fame.

You may search everywhere,

but none can compare

with my wild Irish Rose.