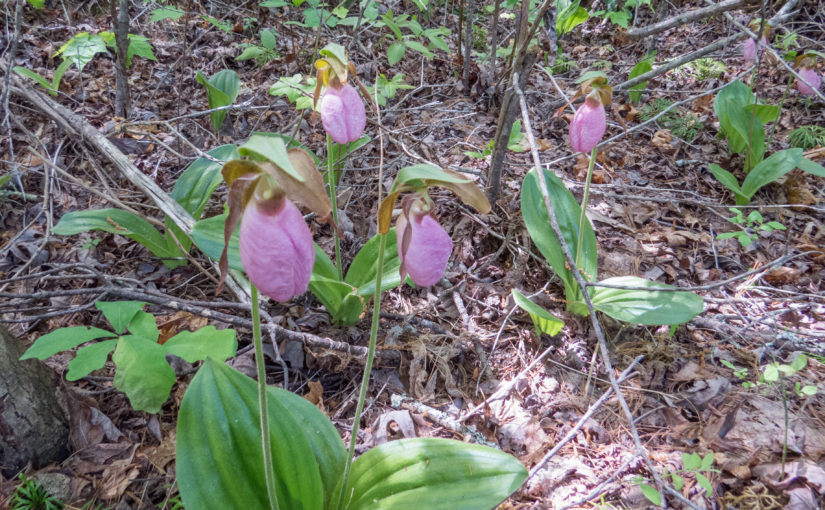 I finally had a chance to visit the second secret garden of lady slippers in the forest. I missed them last year.

The first year when I found them, I monitored their health anxiously. I was worried that someone would discover them and dig them up. But unlike the other patch of lady slippers, they are off the trail, and most people are on horseback or mountain bike and so they don’t see them.

In that first year, out of more than 100 plants, only 8 were fertilized. I watched the seed pods month after month, waiting to see them break open and disperse on the wind. They didn’t.

Finally in October, I took four of the pods and scattered the seeds myself.

The next year when I visited, there were only two fertilized pods.

Last year was the lost summer. I didn’t spend much time in the forest, and didn’t visit the lady slippers.

Today I returned, and approached the patch with some trepidation, but as I crept carefully off the trail, the flood of pink gave me an immediate rush.

There were loads of new plants. The patch was bigger than before. Ten, twenty, forty, eighty – I stopped counting after 150 plants!

I saw about six empty seed pods, from last year – they looked like they had been pecked open by a bird, but the seeds were gone. Hurray!

Best of all: Pink pushing out from beneath dead leaves, a baby being born. I spent a half hour just hanging out with them, looking and looking. Something about that pink.

I swear these lady slippers have an attitude: Finally I went on my way. There were many other delights along the trail – horse balm, for example:

As I neared the final section of the hike, I saw a single lady slipper plant all by itself, just the leaves. It had a few holes, but otherwise seemed healthy.

I marveled at how far it had to ride on a breeze to get there – and then it had to land where the right fungus was in the soil. The lady slipper seed doesn’t carry its own food like most seeds; it has to get nourishment from fungi until it grows up.

I slowed my pace, reluctant to end the hike. One gorgeous lady slipper flower. Proud and not hidden.

She too had a long journey to get there. She nursed on fungi for two or three years to get established on her own – and now she is feeding the fungi in return.

Despite its tenuous reproductive methods, despite the difficulty in finding fertile ground for its seeds, the lady slipper has propagated itself in the forest.

There’s hope for us all.

Today’s penny is a 2013, the year that the lady slippers reappeared after the prescribed burn.