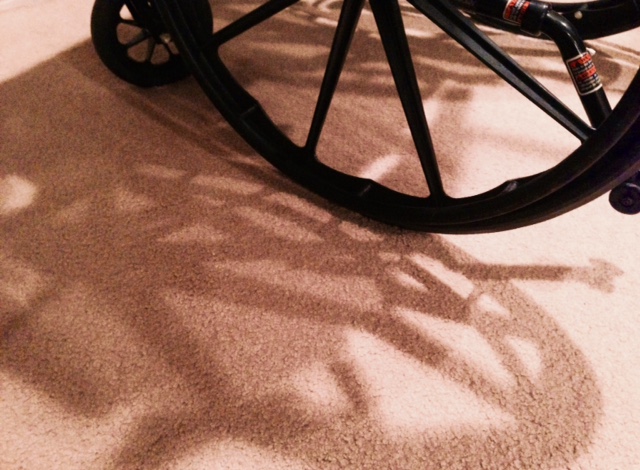 A guy’s gotta have gear.

Tom left the hospital with a wheelchair and a commode, and today he got a truck full of other gear to keep his engine running during home rehab.

A hemi walker, half a walker that folds up small, and with which he can walk the length of a hallway and back, at least.

A quad cane, with four-legged base for stability: For the shower, a special seat and no-skid mat that make it easy to get in and shower while seated: And for pool therapy tomorrow, aqua gloves and an aqua belt.

He’s locked and loaded. Ready to roll – down the sidewalk, into the gym or pool, anywhere he needs to go.

What’s amazing to me is how inexpensive these devices were – $20 or $30 apiece. They make life so much easier and safer for people who don’t have full use of their limbs and digits.

I think today of my great-great uncle Andrew Tyler, who died in 1884. In his obituary they said he was known by everyone in town as “the man who walked on his knees.”

I had thought he was crippled from polio, but a distant relative said that Andrew had been a double amputee.

He got around town on a board with wheels.

I try to imagine the difficulty and humiliation of having to move at ground level like an animal, on a board with wheels – in a town without cutaways or ramps in the sidewalks.

Yet he owned a store in town, and was a “genial businessman and could always be found at work.”

People like Andrew Tyler made us understand that physical ability isn’t the measure of a person’s character or success. In opening minds, they helped break down the barricades for Americans with disabilities.

So in a way, Andrew Tyler’s pain and trials were part of what drove the production of all these great, inexpensive mobility devices that Tom benefits from today.

Today’s penny is a 1984, the 100-year anniversary of Andrew’s death. Thanks, Uncle Andrew.