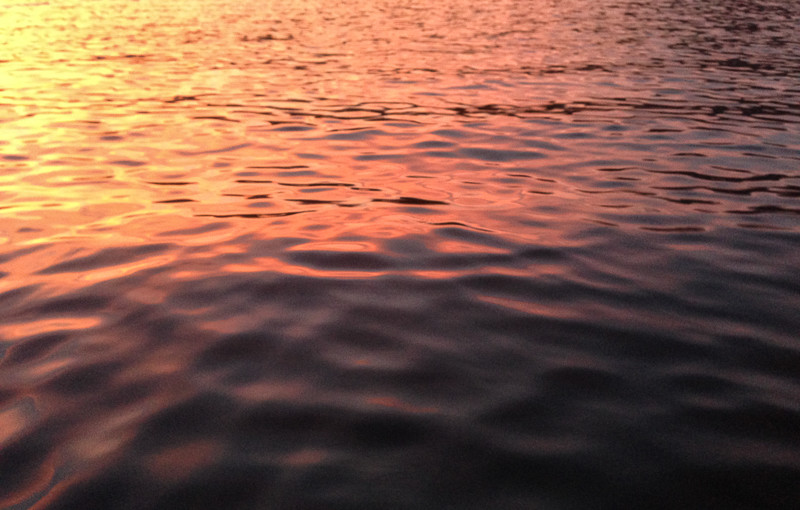 It’s not often you can say you had a truly perfect day. But I did.

First of all: It began after eight solid hours of unbroken sleep, with Tom at my side. Wow, what a treat!

We lounged around for several hours, drinking coffee, reading and talking, and it made me glad (again) that I have Tom in my life.

Then we did our Saturday domestic errands – including a stop at the Farmer’s Market – and reveled in the beautiful weather. A bit hot, but not intolerable. Even simple chores like dropping things off in storage were pleasant, because we weren’t rushed, and we were just happy to be together.

We ate lunch at the clubhouse, on the veranda, looking out over Lake Sconti – had their fabulous Bloody Marys with cucumber vodka, and fish-and-chips (grilled, not battered). It was so great that we just stayed there, talking, and had another round of drinks.

Came home and I took a delicious nap while Tom was reading. Then we discovered that the weather forecast – which had been calling for late afternoon thunderstorms – had changed, and it was going to stay beautiful. So we decided to pack up some food and go kayaking.

Lake Petit was very active, lots of boats, and we paddled in a leisurely fashion, enjoying all the slow views you get from a kayak.

When we got near the marina, a band was just setting up – guitar, fiddle and upright bass – the Pioneer Chicken Stand Band. They were playing a great mix of country, old pop songs, and a bit of gospel. The marina was crowded with people eating, swimming, floating, drinking, laughing, and just having a good time.

We took a long swim, to Eagle Island and then out towards the other cove and back in. The water was like bathwater, fresh and clean, with those lovely cool currents lower that you could dip your feet into. All the while, the music washed over us.

Then we got out and had our dinner – cold chicken from last night, which was really excellent (a mix of spices and herbs baked in avocado oil), with some good manchego cheese, crisp celery hearts, and homemade pickles. It worked together perfectly.

We sat right in front of the band and I could sing along without disturbing anyone because I was drowned out by the speakers. A lot of fun to sing at the top of my lungs, and I surprised Tom by knowing “Rocky Top” – it was one of the songs we did in the band that I was in, back in college.

We watched kids dancing on the floating dock, people joking with each other and with the band, everyone getting on and off boats and paddleboards and kayaks, so many people to watch – just as lively and fun as being in the city, but at Lake Petit, amidst mountains and trees.

It was probably 8:30 before we packed up the kayaks, but we hung around listening to the music from further away.

It was twilight by then, and we marveled over the pinks and blues reflected in the water and dancing through the clouds. The music was still going, and echoed off the mountains in a most pleasant way.

We paddled into the dusk, slowly, with bats swooping all around us and making us laugh. It was dark when we landed, but we’re used to that and had our headlamps on. No problem putting the boats up, and a lovely drive home in the dark, serenaded by cicadas.

A hot shower felt great, and now we are relaxing with a nightcap. A perfect day.

What is a perfect penny? I think it must be shiny, but not brand-new. I have come to really like the true copper ones, they feel better. They have a patina, like an old face with character, Tom notes.

Yep. That’s us. Old faces with character. Old enough to know a great day when we have one.

A 1981, the last year when all pennies were almost-pure copper. And this one was shiny and happy straight from the penny roll, despite its years and scratches.