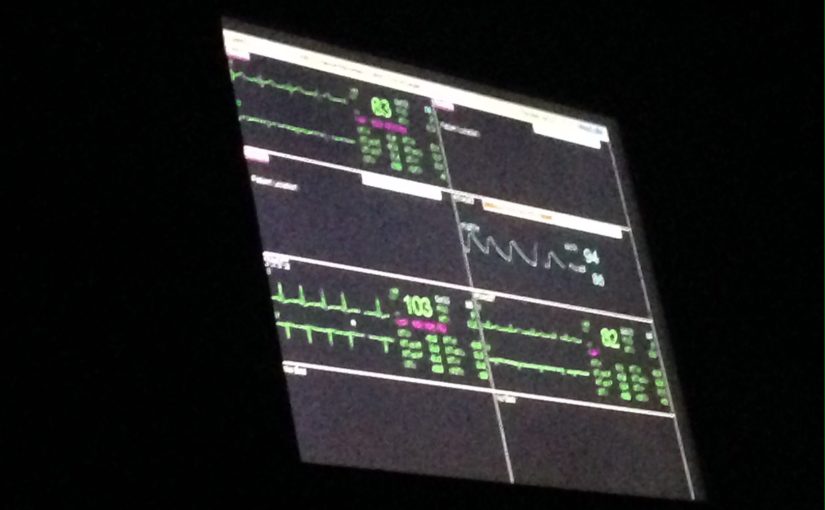 Today started out just like I expected. My birthday morning coffee was spectacularly special, because I shared it with the love of my life, Tom; my precious oldest sister, Ann; and my oldest friend, Dan; and all of us around the same table.

I grinned at birthday greetings from my friends all over the world – on the new iPad Pro that Tom bought me for my birthday.

After surviving a ruptured brain aneurysm, I felt like this was a big birthday to celebrate. It was the day to prove untrue my premonition from last September that I would not live out my 57th year.

Tom had been doing work emails at the dining table and said he was feeling uncomfortable from the long spell in that chair. He went to stretch out for a bit.

Dan, Ann and I played Charades and Pictionary. We wept with laughter over incomprehensible depictions of “Zoo,” “Puppy Love” and “Robin Hood.”

I went to check on Tom a couple times. I was worried about him. Something about the way he walked out of the living room.

I found him huddled in the bathroom. He told me to call an ambulance.

From the front seat of the ambulance, I watched cars ignore our blaring siren and flashing lights, and even pull out in front of us. The ambulance driver said his job has him pretty much in perpetual road rage.

At the ER, it didn’t take long for the doctor to diagnose Tom’s stroke.

We joked with the staff. I told them, “He’ll do anything to avoid playing Pictionary.”

He told them he was trying to make my birthday really special.

Tom immediately began fighting to recover. He tried constantly to extend, lift and move his arm, fingers, legs, toes  on his right side. He refused all help.

But he said it was getting worse.

I wasn’t willing to entrust his brain to a small regional hospital. I requested a transfer to Cleveland University Hospitals, where there would be a whole neurology unit instead of one neurologist on call. Ann and Dan packed me a bag and brought it to me, along with some snacks.

The second ambulance ride started around 8:30, the time of our dinner reservation at a wonderful restaurant on the Vermillion waterfront. I fed Tom some summer sausage in between his examinations, and I ate cheese and trail mix that I had from the house.

The ambulance ride on the freeway included several near-misses with drivers who were texting or falling asleep. I begged my friends on Facebook to send prayers and calming thoughts. I was afraid my premonition might still come true in these last hours of my birthday.

After lengthy intake in Cleveland, a neurologist’s assessment and a chest X-ray, we don’t know what caused the stroke. Tomorrow will be more tests, and physical therapy.

Tom can rest a bit now. They are keeping close watch and doing assessments every two hours.

I am sleepless in a cot next to his bed. I stroke his arm when he is awake. I get the nurse when the alarm won’t stop.

I bite my tongue when he struggles to turn himself.

I smile in the dark when he snores.

Today’s penny is a 2014. That’s the last time Tom had a physical. He never did get the blood work done.

20 thoughts on “Not quite the birthday I expected”