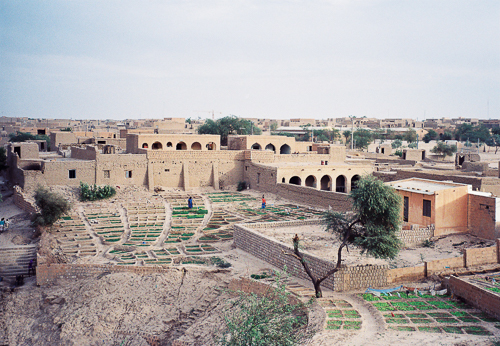 Timbuktu is ancient; it rose from the sand, the sand has taken the place of time. In the twilight, Timbuktu seems as though it could sink again into sand.

I walk in a dream, numbed by the sand. The deep blue robes of the dark-skinned Tuareg, once all nomads, shock me with their brilliance. They move like sand, shifting with the wind, their faces hidden by turbans and scarves. Only their large dark eyes are the clear spots that shine in this terrain.

I am in Timbuktu, and I can say that it is a real place, for there are signs that read, “Tombouctou.” But it is nowhere, anywhere, everywhere, all at once. I feel lost in it, permanently lost to the world.

The neutral color of the sand and the buildings is so uniform that it draws attention to details: the brass studs on the wooden doors, the bits of cloth half-anchored in the walkways, and especially the electrifying colors of the people’s clothing, which stand out just as do the details in a dream.

The houses of mud and straw and tree-trunk beams are exactly as they have been for hundreds of years. They saw the days of Timbuktu’s radiance, a center of trade, a magnet for Islamic scholars. They saw decline when European trade routes left it behind. They saw the explorers who sought the mythical Timbuktu, the ones who made it, and the ones who died trying but came to rest here in spirit.

The city is so ancient that it doesn’t even seem poor. It simply seems locked in another time. Even the intrusions — the phone lines, the radios, the occasional motor scooter, the tourists in their pants and shirts — don’t yet tear asunder the essence of Timbuktu. These signs of modernity are so tangential, so transitory, and so inessential.

What endures is the sand.

The sand is a chant. The sand is the same note, sounded continuously like a mantra. It feels only itself and does not need to consume anything, because it is already everything.

I feel that I dream steadily all night long, and then the whole day is my dreamless sleep.

I plow, rather than walk, in the sand. It is heavy and yet soundless, an effort and yet the sensation of floating. My feet push and lift the sand like water, and my body lurches awkwardly like a stoned camel.

Every step reminds me that I am somewhere that is like nowhere else I have ever been.

And so it is the perfect place to be for a New Year. We mark time this way, we rationalizers of the West, because we are so busy, because celebrating a new year makes us feel we have accomplished something. But that notion seems so ludicrous here.

Great cities fall, great peoples lose their power, and we advance in time but not, it seems, in time. And if Mali can fail and descend the ranks as it has, so too can any place.  At least this is what I think while I am here.

I arrived in Timbuktu on a Russian Antonov plane of unknown antiquity, along with several dozen other tourists. Spending New Year’s Eve in Timbuktu is not, it appears, a very original idea. In fact this is the peak season for Timbuktu, when Europeans pour in for their holidays, lured like me by the mystery of the name. Prices are higher now, and the two hotels are booked.

I almost delayed my journey here to avoid this rush, which other travelers warned me of, in Mopti. But it was the one destination in my six-month Africa trip to which I’d affixed a firm date, and it seemed like I should keep my appointment.

It was an advantage, in a way, for the would-be guides and the sellers of knives and jewelry were kept occupied by the idle, rich vacationers. And the pressure of the tour groups forced Air Mali to add a second flight here for New Year’s Eve, which is why I was able to make a plane.

I spent the evening with Lincoln, a Brazilian who is on an around-the-world six-month trip, and Mark, a Fulbright scholar who is living in Senegal studying 18th century architecture. We didn’t want to attend the drinking party at the hotel or the dancing parties at various small clubs around town, so we ate at a small patisserie which had the worst pastry I’ve ever tried to eat: two slices of stale bread smeared with a thin film of flat frosting (it looked nice, though). We talked about politics and poverty and swapped travel stories.

Near midnight we headed back toward the hotel to sit on a sand dune. The new year came before we got to the dune, and a small cry from within the houses and a few small fireworks popping told us it was the hour.

We wished each other Happy New Year, as we trudged down the sandy road. I was as happy as I have been on this trip, and still full of wonderment that I had actually made it to Timbuktu.

As we passed a group of teenage Malian boys, one of them said something odd which sounds poetic in French. We translated it as: “One could ask, Who is the husband? But still one will never know for sure.”

This set me puzzling, because someone told me once that what you are doing at midnight on New Year’s is an analogy for how you will spend the coming year. What does this mean for me? Walking in my sleep with two men, neither of them my husband?

After a short rest on the sand dune, wishing we could see more stars (they are hidden by the clouds), we said goodnight.

There were only a few people sitting around at the remnants of the hotel party, and they looked bored. We had passed other foreigners on the road, very dressed up, who looked like they were trying to find a good time.

I sat outside and felt the breeze and the desert. I am glad I don’t feel this obligation to party.

It is enough just to be here, and to know with some odd finality where I am.

Today’s penny is a 1997. May 2017 be filled with the same strong sense of place that I had amidst shifting sands 20 years ago.