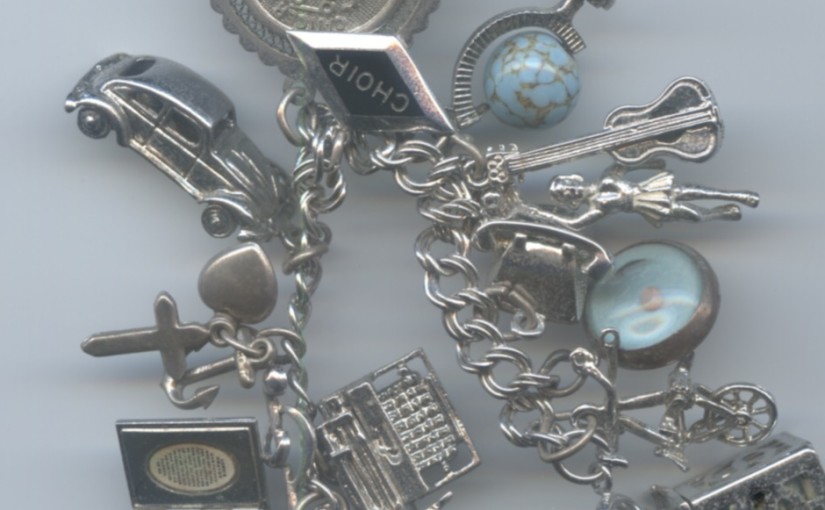 I’ve been sorting through memorabilia, and found my charm bracelet from high school. Each charm was supposed to represent one of the meaningful things in my life.

There’s one of a woman playing tennis. Well, I tried it for a summer. Spent most of my time chasing the ball. I think the charm was more meaningful because of the era – when Billy Jean King beat Bobby Riggs. A Volkswagen Beetle – that was the family car I got to use; I never owned another VW. A telephone – because I like to talk on the phone – when did that change? A bible – can’t remember the last time I read it.

Some of the interests stayed with me longer than tennis: A cat – I had them as pets until 1998. A sewing machine – I kept up with sewing until the late 1980s. A guitar – also lasted through the ’80s until my guitar got stolen. A bicycle – had one until 2002. Star sign of Cancer – I admit I still read my horoscope sometimes.

Yet, how little these things said about where I was going in life. They said more about the fact that I was a middle-class girl with pretty pedestrian interests.

But there were two charms that held everything else together: a typewriter, and a globe.

I knew I wanted to write, and I went to college to study journalism.

I wanted to see the world. Journalism took me there.

Did I lead a charmed life? It would be easy to say that I did, given the places I traveled and worked. And given that I’ve had lots of opportunities, and very few toils and troubles compared to so many people.

If you want to find out whether you have led a charmed life, here’s a checklist.

Although I can’t say YES! to all those things, I have enough of them.

But I think the list is even simpler than that.

Leading a charmed life, compared to several billion people on this planet and plenty of Americans, means that I have all the healthy food I need, clean water, a safe private toilet in my own home, a loving partner, no debts….

… no land mines on my route to the store, and no civil war on the interstate…

And complete freedom of speech.

I don’t need anything jangling on my wrist to remind me of that. And you don’t have to leave the U.S. to know it, either.

Today’s penny is a 1975, my sophomore year in high school, when I still thought that “luck” was hitting a tennis ball.