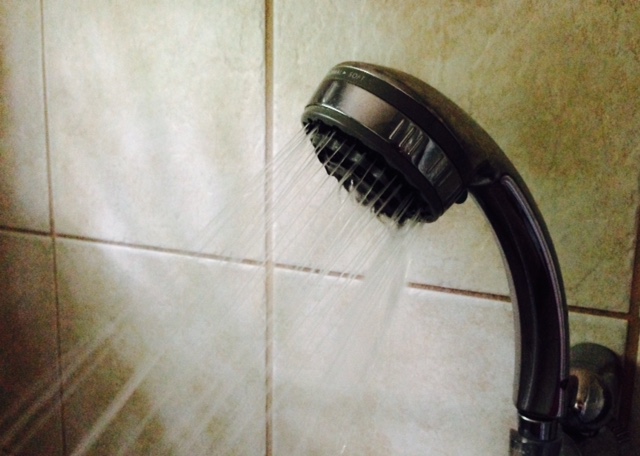 Tom startled me by confessing he’d taken a shower.

Those of us who haven’t had a stroke take a shower every day, without thinking about it. For Tom, this accomplishment is real cause for celebration.

It’s made up of so many individual accomplishments, each of which took hours of therapy and exercise to perfect.

First, being able to sit upright in bed without flopping over. In our first days at the hospital in Cleveland, he couldn’t sit at the edge of the bed without support.

Now when he wants to get out of bed, he just shifts his legs and rotates his hips, puts his legs over the side of the bed, and then plops his feet on the ground while moving to sit upright. If you try to figure out how many muscles are involved in just those movements, you’ll get dizzy.

He can stand up from the bed smoothly and continue to stand up straight while looking down and to either side. Think of how wobbly a baby is when it first tries to stand, and you may appreciate how hard it is for a 6′ tall, 200-pound man to hold himself upright when his brain has had to relearn the entire operation.

He can move his legs and feet to pivot and sit down gracefully in his wheelchair. Another, different set of muscles. Another, elaborate script from the brain to control them.

He can put on his seatbelt, unlock the brakes on the chair, and push with his hands and his left foot to maneuver the chair forward, backward, and around corners. I don’t think I could do this even able-bodied.

He can wheel himself to the shower, which is in an adjoining room through a standard-width door. He has to get past the door and toilet, then shut the door behind him, since (inexplicably for a rehab hospital) the door opens inward.

He can slip out of his clothes – he’s wearing hospital scrubs these days, but it still requires untying the pants, pulling them off, and pulling the top over his head.

Then he can pivot himself from the chair onto the shower bench, turn the water controls, and grab the shower head to spray himself.

He can also unscrew the cap from a plastic bottle and pour soap and shampoo out into his hands. He can put the soap on his skin and the shampoo on his head, rub it in, and rinse it off. The finger movements involved in this are complicated – do it in slow motion yourself sometime, and you’ll see.

Then he gets dressed again – and ties a bow on the drawstring of the pants. Try doing that, but on your right hand only use the thumb and forefinger.

And he wheels back out again. Safely.

All of this is a miracle to me. Tom’s made so much progress so fast, I can hardly keep up with him.

It makes me tired just writing about it.

More than tired though, I feel joy: Tom is mobile, independent – and clean.

Today’s penny is a 2001. That’s the first year that Tom and I took a shower together.

6 thoughts on “Taking a shower”