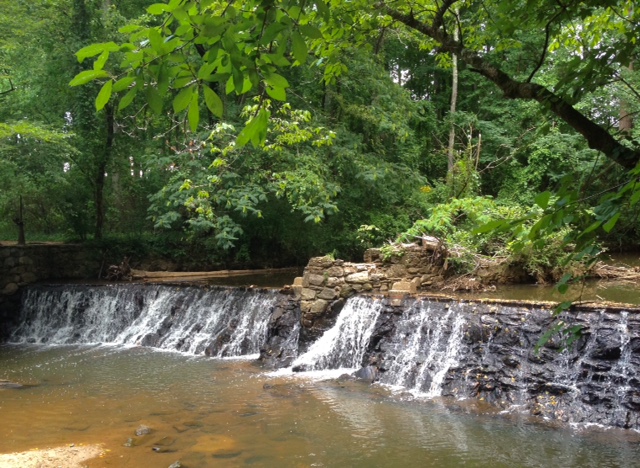 Tom wasn’t done with rehab today until nearly 5 p.m. I wanted to beat the rush hour traffic, so I drove into town early and went to explore the vast park just across the street from the rehab hospital.

Lullwater Park is part of the Emory University campus, and technically is only available to students and faculty. But its lushness and the promise of running trails made it too tempting for me to ignore.

I figured that no one would be checking ID cards at the entrance, and they weren’t. I strode on in, and within 500 feet the thick silence of the trees had hushed the city sounds of traffic.

An asphalt road for service vehicles leads to the Lullwater House mansion, built for Coca-Cola heir Walter Candler with stone quarried from these lands. I passed several groups of runners who clearly were not college age yet.

The trail goes past a stream that feeds into Candler Lake, from where you can see only the top of one very tall building. Otherwise, you could be in a national forest, so far removed from urban hassles. Further on you pass a spillway (in featured image, at top). Gravel and dirt trails cut away from the asphalt and go deeper into the woods.

A thunderstorm rumbled in the distance. I had already decided that I’d borrow some of Tom’s clothes after my sweaty hike, so I didn’t care if it rained. The booming added to the atmosphere – nature pushing and pulling me, medicine and therapy while I am still in recovery.

I was thinking about Tom, and Mr. Benson, and the nodding lady in Room 331 who casts a bleak eye at me when I greet her. I see so many people in this hospital who look like they can’t find a reason to get out of bed in the morning, let alone rehabilitate their bodies.

They need more than visitors. They need perspective, and fresh air.

How I’d love to be able to bring them over here to Lullwater, one at a time, for an hour a day. I bet it would boost their recovery times.

Then I thought, This would be a cool nonprofit to run. Wouldn’t need much money. Some legalities to work out. Buy a couple of motorized wheelchairs and find volunteers to come over here with the patients.

Why not nature therapy? There’s already been plenty of research that walking in nature helps your health.

My entrepreneurial bent doesn’t run to making money. If I won the lottery, I’d probably use it to start a bunch of nonprofits to carry out ideas like this one.

Today’s penny is a 2012. That’s the year I incorporated my first nonprofit.

8 thoughts on “A path to Lullwater”