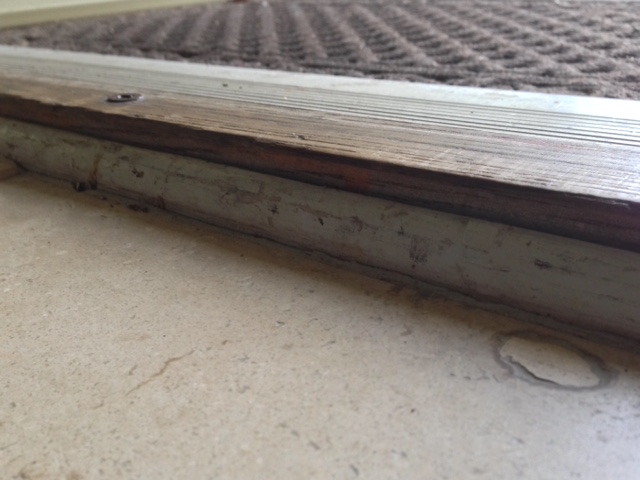 We were running late, of course. Everything takes longer when one of you is in a wheelchair and neither of you is sleeping very well.

Tom’s appointment at the barbershop was for 10 a.m. I’d called to let them know we would be late, and the receptionist said it was OK as long as we got there before 10:30.

It was already after 10 when Tom wheeled to the front door of the condo. And then his front wheel got stuck on the lip at the door threshold.

There’s often a height difference between the inside floor and the door threshold. To wheel across it smoothly, the threshold should have a bevel.

At Tom’s door, the bump is about 3/4″ high and not beveled. That’s a long ways to lift a wheelchair over with a 198-pound man in it.

Somehow we managed to shove, turn and bump him over it. Getting him into the car and the wheelchair into the back seat was another operation we are still working on, but it’s a bit smoother each time.

The parking gods smiled upon us and gave us a space directly across from the sidewalk cutaway ramp at the plaza. I had scoped out the place earlier, and I knew where there was an elevator to the second floor.

We got to the barber’s at 10:17 a.m. The lip to their door was fine – it had a bevel at the threshold that the chair rolled right over.

Devon, the barber, managed to be respectful, concerned, and helpful all at once. He supported Tom as he climbed into the barber chair, with a strength and naturalness that made me wonder if he has a close relative in a wheelchair.

He did a great job with Tom’s hair. When it was time to climb down, the other barber came over and showed Devon how to flip up the footrest, and reminded him to lock the chair. He’d clearly done it before.

This isn’t my first experience with walkers and wheelchairs, either. Back in 2008-09, I was a companion for a friend’s mother. Judy had a degenerative disease similar to Parkinson’s, and I took her to the gym, to stores, and on road trips.  She and I got stuck with her in the wheelchair more than a few times due to poor design and people who were oblivious to what “access” means.

Somehow, though, I’d forgotten the trick to getting a wheelchair over a clunky threshold. Maybe Judy was always able to help enough with her feet to get her past it.

Tom and I had a second appointment after the barber – a pedicure for both of us. The salon was next to the barber shop, and the salon chair was not hard for him to get in and out of.  His feet have never looked so good.

An 80-something lady wheeled in, nicely dressed in a patterned summer suit and accompanied by her daughter and son-in-law. Her wheelchair was stylishly upholstered in plaid. She held her head up even while getting into the salon chair. Her daughter helped her pick the exact shade of beige nail polish to compliment her outfit.

It was after noon when we finished – time to celebrate with lunch out. We picked the Chinese restaurant. Without looking at the doorway.

The lip was bad. Uneven and high. No bevel.

No amount of pushing was going to get Tom over it.

A woman saw me struggling and came over. “Step on it,” she said, pointing down.

The wheelchair has bars in the back, like curb feelers only turned down toward the ground. They are designed to prevent the wheelchair from tipping over backwards.

But if the wheelchair escort steps on one of them, the chair will lift up in front just enough to get over that lip on the door. And the escort won’t put her back out.

“Oh wow. Thank you!” I cast the woman a look that I hope communicated the depth of my gratitude for this revelation.

We had a lovely lunch. Just like “normal” people.

Today’s penny is a 2010, the year that the most recent ADA guidelines were published.

4 thoughts on “At the threshold”