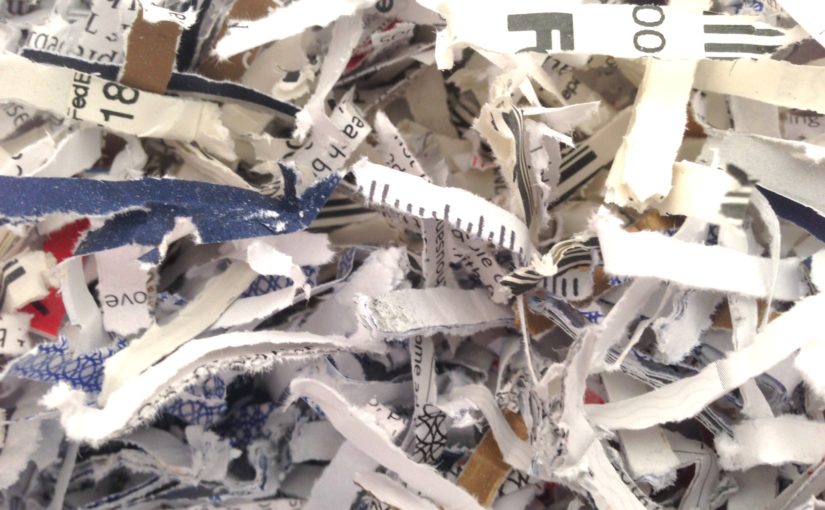 I’d put it off as long as I could, but today I had to face the file folders in my office.

I hadn’t done a thorough sorting of office paperwork in maybe four years – not the superficial kind of sorting where you are only stuffing more paper into existing files and tossing the junk mail, but a real sorting where you actually read what’s on all those pieces of paper in all your folders, including the folders that you never open. Then you throw out more than half of it.

This work is hard because you have to pay attention to details. You don’t want to accidentally throw out the receipts for the tax return you haven’t done yet. But there’s fun it too: finding receipts from our apartment in Dubai filled me with nostalgia, and I got teary-eyed reading the last birthday card that Dad ever gave me, on my 50th.

The woodpecker appeared at the window. As he had done before, he clung to the frame of the window, and he looked in at me.

He looked around the office, he looked at me some more, he turned his neck and looked up, down, behind him. He seemed to be taking in every detail.

This gave me the incredible luxury of being very close to a wild animal for long long minutes. Every second was intense.

I drank in the details of his eyes and the pupils and the tiny feathers of color around them. I noticed that his beak is longer than the depth of his head, and how the muscles underneath support it.

When he faced head-on, looking right at me, the wind ruffled his red crown feathers.  They’re red red red, and they’re very short, and when the wind hit them they went into crazy designs. A few times they stood straight up as though he had a mohawk and he had used hair product on them. I laughed so hard.

Eventually I even told him where we live. I told him our address, said we are moving back on Friday, said he was welcome to visit me there, although I made it clear that he is not allowed to peck at the house. He looked at me and made no promises.

After the woodpecker left, my paperwork became very dull indeed.

Once I got past the memorabilia and handwritten notes, and had shredded about 1,000 pages of bank and health records, all those details weren’t that much fun anymore.

The woodpecker must have wondered, How can she afford to spend so much time just to tear up paper? She can’t eat it and she can’t mate with it and she’s not building a nest.

Today’s penny is a 2015, the year we bought the shredder.

One thought on “Attention to details”