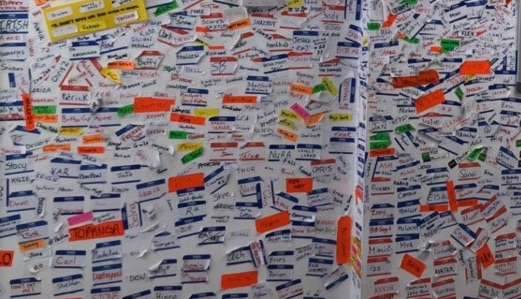 Would you pay $30 to be locked in a room with a group of strangers for an hour?

And be required to solve a lot of problems in order to escape?

Well, this is what people do for fun in Atlanta now. It’s called a room escape game, and Atlanta has eight companies offering this form of entertainment – seven of them opened in the past year.

There are puzzles to decipher in order to get out of the room, with a variety of twists to keep your brain occupied and your heart racing. Secret rooms, hunting clues, potential for violent retribution, beating the clock – it has all the ingredients of a great video game.

Which is how room escape games started, more than 10 years ago. Then in Japan someone got the idea to bring video games to real life, and the idea spread to Europe, and finally hit the U.S. around 2012 (read a trail of discovery experiences here).

Teamwork is necessary in order to “win” the game and get out before the buzzer sounds. Some companies even put prospective employees into a game as a way of testing how they work in a team.

Predicaments vary. You might be trying to get away before zombies eat you. Or you might have to get out to escape a vindictive psycho who knows you have unearthed evidence of him stealing a family gemstone.

It  doesn’t surprise me that people find this fun, or that they would pay to do it.

What surprises me is realizing that I have been playing room escape games for years. It’s called “overseas development work.”

While I’m not physically locked in a room with my teammates, we are bound together by the requirements of a contract and the mutual desire to move progress forward.

We solve complex problems together, and if everything works by the end of the contract we’ve escaped from the confines of this particular set of problems.

There are always new rooms to be solved. For most of us, this game is fun.

It can be scary, stressful, exasperating, challenging. We sometimes fumble in the dark.

But I have paid for it.

When you realize that, for so many of the players, it really is a game … when you try again and again to escape,  but you keep getting pulled back into the same quagmire…  when you have made some real progress only to have the lights turned out on you… when you have to continually solve the same problems, but it never gets you out of the room… it takes a toll.

Eventually, you don’t want to go in there again.

Not even if they paid you.