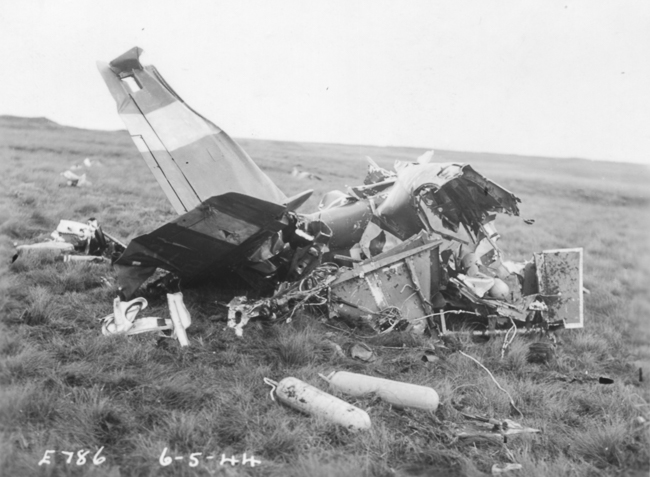 When Dad was 22, he had never been on an airplane or been anywhere but Ohio. He was a farm boy before World War II.

He was processed through Dayton at Wright-Patterson with thousands of other farm boys, and I guess that’s where he got a few days of training to be an air traffic controller.

Then he was shipped off to Burtonwood Air Base in England, the largest airfield in Europe during the war. It was taken over by the U.S. Army Air Force in 1942, to become a servicing center for its combat planes, and by the end of the war 18,000 servicemen were there.

I have a photo album that contains Dad’s pictures from Burtonwood. It’s full of wrecked planes.

I never saw this album as a kid. My sisters did, but by the time I was old enough to look at it, Dad had put it away, along with most of his war stories.

For Memorial Day, I looked at the album to try and understand those photos.

There are shots of planes taking off and landing, and casual scenes around the air base. There are photos of Dad and other GIs relaxing on the base, in nearby Warrington, or in other English cities. They had months to be tourists after the war was over, while they were waiting to be shipped home.

About a third of the photos are the remainders of planes. Many of these photos are marked RESTRICTED. Dad told my sister Ann that it was illegal for him to have them, but he never said how he got them, or why. The planes look so frail, even the intact ones. They flew with propellers and they look like toys. Easily destroyed.

Cockpits crumpled. Landing gear a mass of metal – or knocked off completely. Bent propellers. Nose broken off. Bare bones of a burnt frame. Wings missing, engines in a mangled heap. Scattered parts barely discernible as a plane, across an expanse of a field. Burtonwood was hit at least a couple times by Nazi bombers. Some of the planes in the photos may have been damaged then, or by enemy fire on a run. Some might be from crashes elsewhere in England. The rest probably wrecked on takeoff or landing at Burtonwood.

While the pilots may have escaped some of the crashes, many clearly had no survivors.

Air traffic control must have been a hellish job for a farm boy. It’s extremely stressful even at a peacetime domestic airport.

Dad must have been on duty during some of these wrecks.

The one story I always remember him telling was about the guy who got his head chopped off by a propeller. Sun glare in his eyes, a noisy, busy airfield. Probably happened more than once.

It’s hard to think about people dying by accident or friendly fire during a war. We’d rather picture them taking a brave last stand against the enemy.

They are no less a part of the war and the victory.

Confusion, glare, too much noise – that’s all part of what you fight when you’re defending your freedom.

General John Logan, national commander of the Grand Army of the Republic, proclaimed May 30, 1868 as Decoration Day, to honor the dead from the Civil War. May 30 was chosen because “it wasn’t the anniversary of any particular battle.”

Today’s penny is a 1971. It was not until then that Memorial Day became a U.S. federal holiday.