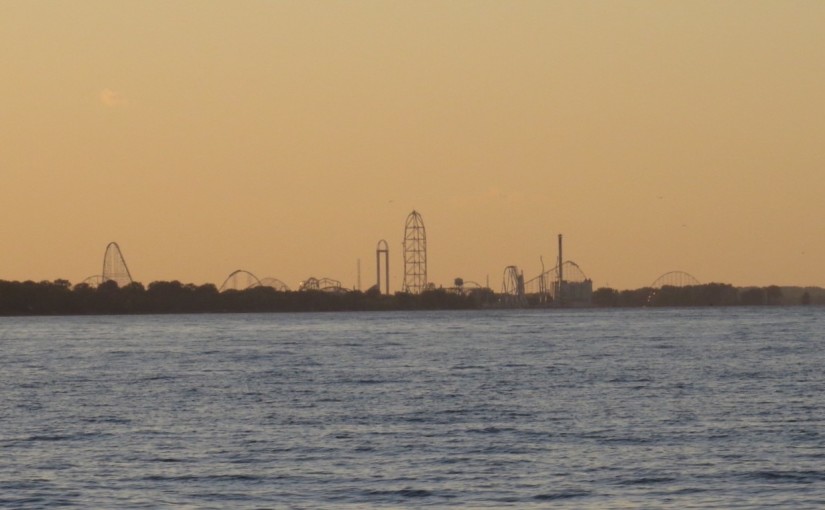 I used to think that Cedar Point was a made-up name for the amusement park, and a strange one at that. Really, it doesn’t sound like it would be fun, the way that “Disneyland” did.

No: Cedar Point was simply the name of a place, long before it was a company and a destination for several million visitors every summer.

And like all places, it carries memories of death as well as life.

Even back in the pioneer days of Sandusky, the 1830s, people called the peninsula Cedar Point. With its cover of cedar trees, this strip of land jutting out into Lake Erie was the perfect place to go fishing.

One pioneer recalled going there all night to fish, and coming back with a catch that made it worth losing a night’s sleep.

During the Civil War, the point was a military outpost. A German immigrant named Louis Zistel made a living transporting Confederate prisoners to nearby Johnson’s Island.

After the war, Zistel decided to convert to recreation by transporting fun-seekers to Cedar Point’s “bathing beaches” – the beautiful white sands that crusted its shores.

Cedar Point later had a serious downswing, but it survived by having dance bands perform. Amusement rides were part of the park from its earliest days, but they didn’t become a major attraction until the 1960s.

While I have many memories of working and playing at Cedar Point, there is a gloom that haunts it.

I met my first love, Jim Lembke, when we worked together at Cedar Point in 1976. But he died in a car accident a few months after he returned to his home in Buffalo, and I plunged into a deep depression.

It is the first place where I remember reveling in the contrast between light and shadow, between glory and its inevitable disintegration.

I found a strange appeal in going to the park during the winter. With the rides shut down, and covered with snow, the whole place seemed haunted.

When I was growing up, there were always rumors about deaths at Cedar Point that had been hushed up. My father told of repair crews who worked all night, every night, welding the joints of the aging roller coasters. There were even ghost stories of hauntings.

Like any place where hoardes of people gather, Cedar Point has had deaths, of course – though not, I must add, from accidents on rides.

While reading the death records of our ancestors in Huron County, Ann and I noticed one for George Gander. He was 17 when he drowned at Cedar Point on July 5, 1891.

We were both greatly saddened by this record, even though we knew nothing else about him and aren’t related to him. We imagined that – like generations of teens after him – he was out drinking for the 4th of July and went for a swim.

When you’re born, Ann says, you get a ticket with a number. It’s the number of days you get to live.

We all get that ticket to ride. Some of us just get a shorter ride than others.

In honor of the centennial of George Gander’s death, I choose a 1991 penny.