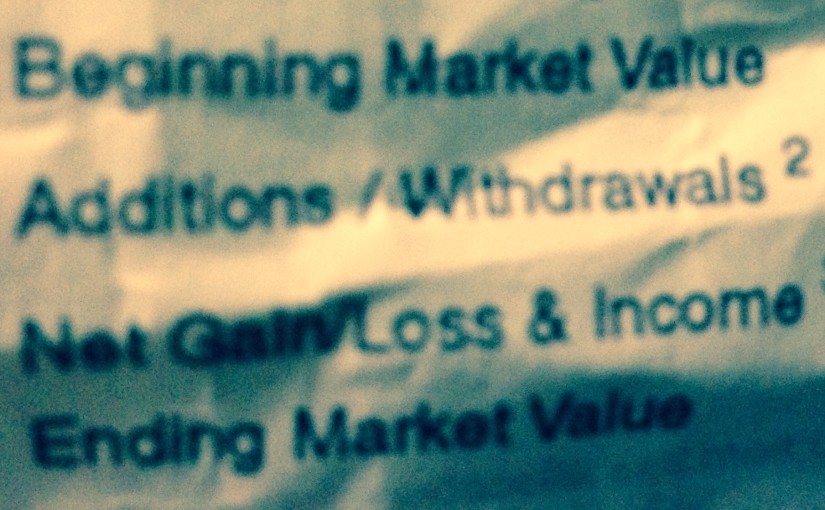 My life is exactly the same.

In December of 2008, after the U.S. financial meltdown, I wrote those words on a card. I stapled the card to the folder where I keep the receipts for the month, so that I would see it every time I filed away my spending.

I have been a conservative all my life when it comes to spending and I have never been a high-risk investor. To lose that much money, abruptly and through circumstances beyond my control, would have been devastating at any other point in my life.

But by then, at the age of 49, I realized that my investments just didn’t mean much. They had become a kind of fiction, told and retold and co-opted and dressed up in a different costume by the folks on Wall Street. The story line played out in my monthly statements, but I was just a member of the audience.

My note was not a way of saying, “Easy come, easy go.” I worked hard for that money and denied myself a lot in order to save and invest. I was as outraged as any other American by the corrupt actors who screwed us all.

The note was my way of saying to myself, “Don’t let them steal anything else from you. Don’t let them take away who you really are.”

Numbers on paper. That’s what my investments became to me.

Time is what changed their value.

Today I was talking to my investment counselor in Seattle, at Robertson/Das, about some account changes. I’ve been their client for more than 20 years, ever since I discovered socially responsible investing.

I thought about how much more relaxed I am about my investments than I was in 2007.

I have less in my accounts than I did then.

But I have a lot more in my head and in my spirit.