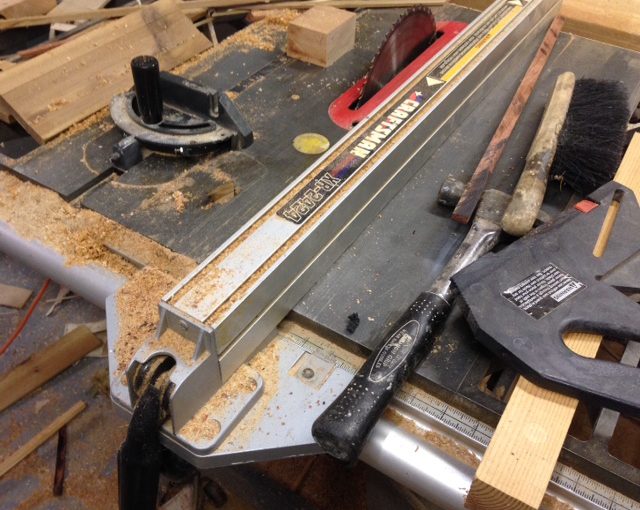 At the rental house, there are two garages, but one of them isn’t for cars. It’s a woodworking shop, and it belongs to Amanda.

She let me see it. I got to ogle the band saw, the power saw, the shaping tools that I don’t know the names of but would like to. I got to run my fingers over the scraps of wood, and sit down on the cool bench she made that has a built-in planter.

The smell of sawdust to me what the smell of baking bread is to many people. A comforting domestic smell that means something is being created which will delight me.

It means Dad’s in his shop.

Dad could make anything, it seemed, because he knew carpentry in addition to his trade of plumbing, and he read Popular Mechanics magazine where they had plans for building things like go carts.

He didn’t teach his girls to use the equipment in his shop. And when we were growing up, girls didn’t take shop class. Amanda is thin and light-footed as a sprite, with long curly hair. I strain to imagine her wrestling large pieces of trees, conjuring their compliance with the saw blade.

She took shop, and then outside woodworking classes, since she was a teenager. She discovered that she liked it, and though she went to college and majored in anthropology and now has a job as a data analyst, she still loves her woodworking.

She spent two summers here, renovating the house for her parents. She repaired panels and trim, and she built furniture.

To do all that, she needed the tools. She had learned in classes where she had use of the tools, but now it was time for her own.

She posted an ad on the community bulletin board, listing all the tools she needed, hoping that somehow, someone would have a few to sell.

The first caller had a basement full of antique tools that had been his father’s. They were worth tens of thousands of dollars. The tools had been moved into the basement when the foundation was poured, and they built the house around the tools. There was no way to get them out with tearing out at least one wall.

The next caller also had a basement full of all the tools she needed. They weren’t antiques, they were in great condition, and the owner loved them. He was going blind, though.

It began with his depth perception, a critical part of working with power tools. Every month, less that he could do safely.

The tools were perfect. Amanda didn’t dare hope she could afford them. How much?

For all of them. I just want someone to use them.

Amanda couldn’t believe her good luck. She hesitated, but she could see that he meant it.

To a woodworker, silent tools would be a terrible ghost to live with.

As she told me this story, Amanda’s face shone with the wonder of it. Now she has a complete woodworking shop, and she can make anything she wants to. For $300. She is still amazed at this gift.

We can never see ourselves as others see us. Amanda can’t know how Arliss saw her. But because I am closer to Arliss in age, I have an idea of his vision of Amanda.

She is full of energy, and freshness, and artistry, and joy. She loves woodworking, and that pours from her with an unselfconscious ease.

It isn’t only that Arliss wanted someone to use the tools. He wanted her to have those tools.

A girl of my generation who wanted to do woodworking would have to be apologetic, maybe evasively look at the floor so that it wouldn’t be so obvious that she cared that much about it.

But now, a young woman who needs woodworking tools can ask for them, and there will be an Arliss who will find a great happiness that his much-loved tools can find a home with her.

Blindness did not prevent Arliss from seeing in Amanda the same passion and love for wood that he had.

I’m happy just to live in a house adjoining this woodworking shop.

Today’s penny is a 2014, the year that Amanda got the tools from Arliss.

2 thoughts on “The woodworker”