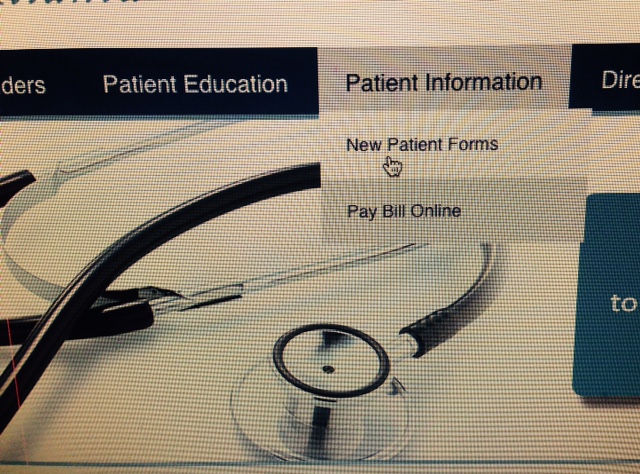 Because Tom can’t write much yet, I’m filling out his medical forms. It’s bad enough doing these stupid pieces of paper for myself; doing them for someone else is a real pain in the arse.

First of all: Why the hell are these forms still on PAPER?

The big advance for medical offices has been that you can now download the forms and fill them out in advance – but you have to print them out and use a pen.

Why on earth can’t they supply fillable PDFs? I can type about four times as fast as I can write by hand, and then the office would save the labor of transcribing what I write. Plus, imagine how many errors are made in the transcription process by a harried office worker trying to decipher the form of a patient with bad handwriting.

I know it’s possible to do medical forms electronically. Last year I went to an oral surgeon’s office and THEY had electronic forms. Hallelujah! Welcome to the 21st century!

Next: repetition. I’ll get three forms for one doctor visit, and each one asks for the same damn info – name, address, date of birth, contact, etc. These days, I just write “same as previous form.”

Oh my: List all medications, doses and frequencies. This question is easy for me because I can leave it blank. Now for Tom it’s “see attached list.”

Then there’s the actual substantive questions. Tom and I had quite a discussion about the lists of “Do you now or have you ever had ….”

I mean, seriously, who hasn’t had diarrhea, trouble sleeping, stomach pains, or headaches?

I don’t know what level of any symptoms would be considered unusual or noteworthy. That’s why I’m going to a doctor, right?

Tom remembers laughing at those forms when he was an Army Ranger. Have you ever had shortness of breath? Well, usually when doing 40-mile road marches it happens a few times. Muscular pain? Yeah, but it goes away if you have a couple hours when you can put down that 100-pound rucksack.

Which leads to the real puzzle about medical forms: How honest do you suppose people are filling out these forms? Does anyone but a teetotaler accurately depict their drinking patterns? Do you reckon people might say that they exercise three to five times a week when really it’s more like twice a month?

I wonder what the job is called for designing medical forms. I want that job. Because they should be written by real patients.

Today’s penny is a 2015, the first year that I was ever given a medical form that could be filled in electronically.

2 thoughts on “Fill in the blank”