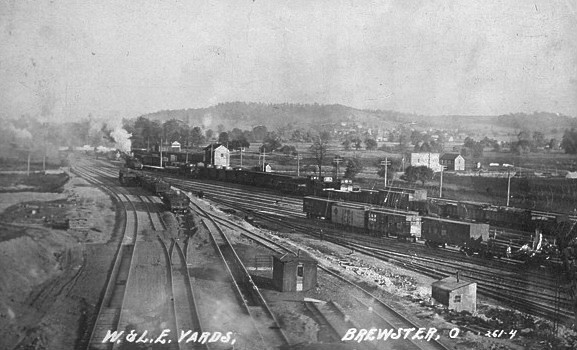 The train was all black, going fast, on a track that followed the rim of a wooden volcano. Its whistle was full of darkness, echoing into the cavern of void around it.

I was scared, even as it curved away from me. I knew it would be back.

That is the first dream I remember having. I was about 5.

I grew up with the sound of trains. The tracks passed a mile or two from our house, and we could hear the train whistle blow and the clatter of those iron wheels all day and night.

As a child, I probably didn’t understand trains, and picked up the fear in the car when we approached the tracks. My train nightmare occurred only that one time, but I remembered it and have often thought of it.

The sound of the train became the sound of home, an audio clue that everything is normal and right. I love hearing it when we vacation in Ohio.

Last night I stayed at an AirBnB house that was lovely. The only negative point was that it was about a tenth of a mile from the railroad tracks. The host warned about it in the house manual, and several reviewers mentioned that it was loud and woke them up.

I didn’t actually catch that detail until I’d paid for the room. Oh well, at least it wasn’t expensive.

When I arrived, I saw that the host had put a white-noise machine in the bedroom. I thought the sound of that thing was worse than any train could be, and turned it off.

I laid on the bed to relax for a few minutes. Then, there it was: a train approaching. It sounded like it was coming right through the backyard and headed for my bathroom.

I relaxed and listened. I got comfortable with that sound again. I told my brain, “See? It’s just a passing train. Just like those trains we used to hear back home when I was a kid. It’s nice. We can sleep right through it.”

And that’s all it took.

I slept the night through and never heard the train.

Today’s penny is 1988, the year that the Wheeling and Lake Erie Railway merged with Norfolk and Western Railway after 72 years.

Featured image from a photo postcard of the Wheeling and Lake Erie Railroad’s Brewster, Ohio yards in 1910 / Wikimedia