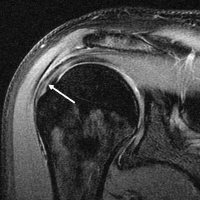 The doc yesterday referred me for one on my shoulder, and I wanted to squeeze it in before the end of the year since I’ve met my deductible. MRIs run $5,000 and up.

I was the last patient of the day, and I had to wait for almost an hour before the technician ushered me back.

“Can I see your implant card?” he said.

I had marked on the form that I have an aneurysm clip in my head. Richard needed to see an official document that this clip was not made of any metal that would be affected by the MRI machine.

I assured Richard that my clip was titanium, safe for MRIs, because the doctors had told me that. Reasonably enough, Richard would not just take my word for it.

If the clip was not titanium, he said, if it was a ferrous metal that was attracted to magnets, it could twist and torque in my brain, responding to the magnetic field. Yikes! The very idea of it was terrifying.

I was absolutely certain that the doctors had told me that everything they used was titanium. Nonetheless, I had to call the neurosurgery department and beg the desk person to find someone who could fax the implant information to Richard. After more than half an hour, Richard had what he needed.

Then there was a problem with the MRI machine. I went through the first 10 minutes before Richard decided that it wasn’t working and that he would have to switch to a different fixture to hold my shoulder in place. He had to use an older model and start the whole series over again.

Altogether, I bet that I was in that machine listening to those horrible noises for almost an hour. But since I had caused Richard such grief already with the paperwork (which wasn’t my fault because no one had told me I had to bring this paperwork, and the surgeons had never given me any implant card), I wanted to be certain to be a model patient during the MRI itself.

So I held as still as I could, and I meditated, and I breathed very evenly in shallow breaths. Called on my will and my stubbornness.

And I succeeded! I was proud of myself for doing that, because it was difficult, even with hearing protectors, to deal with that noise. I’ve always been sensitive to noises, and that’s another “even moreso” since the aneurysm.

I was also proud of myself because, if I was ever going to have another anxiety attack, I would’ve had one in the midst of all of this BS with the paperwork and then the noise of the MRI itself. But I felt no anxiety. I was only flustered and a little perturbed when I had to deal with the surgeon’s office.

Today’s penny is a 1977.  “On July 3, 1977, nearly five hours after the start of the first MRI test, the first human scan was made as the first MRI prototype,” says the Tesla Society.