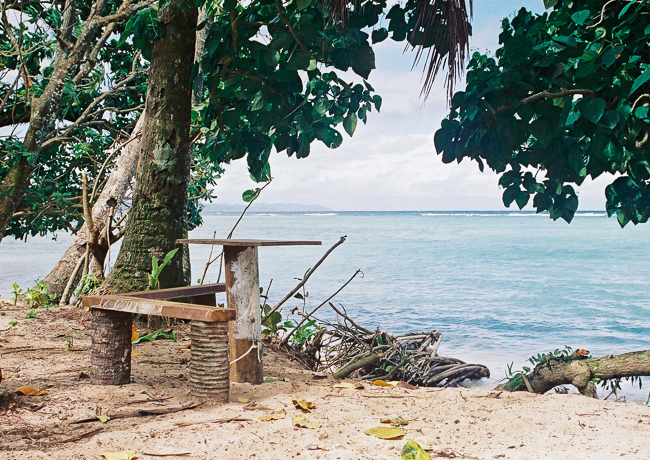 It was so hard to leave the cabina, even with all those spider corpses lying around. A perfect sunrise over the South Pacific, a gentle breeze, clear and bright but not fiercely bright.

When the bus pulled up, I was dismayed to see it full, but I managed to find a place when a woman pulled her child in closer.

As soon as the bus started moving, I was happy again. So much to look at: the sea, the hills, the trees, and the people.

I felt part of the ordinary rhythm of daily village life: people going to work in the fields, children going to school, the bus moving on schedule through the villages and across the island, families carrying bundles for neighbors and friends. So peaceful, so stable, an island that has not known war or starvation or crime. It seems impossible that it even exists.

Already I dream of returning to the cabina to write my book.

Before I knew it we were in Somosomo and the bus dropped me at the boat jetty at exactly 8 a.m. With three hours to departure, I dumped my luggage and caught a $1 taxi back to town. Bought newspapers and magazines (the latest issue of Time!) and cold juice and cold Coke and peanuts, and walked out of town and sat by a river reading for awhile.

A young man came by and we chatted a little. He asked if I’d been to the Sliding Rocks. He said it was close to the jetty.

I grabbed a taxi. The driver’s name was Basant, and he asked about my work, my travels, my life, how I liked the island.

When I got to the rocks, I noticed how much warmer and drier this side of the island was. Already, before 10, it was clear and I could see the clouds all bunched up on the Levena side.

There was not a soul around – why would there be, on a weekday morning? I stripped off my pants and bra, figuring that undies and a T-shirt would be good enough if someone did happen along.

I scrambled across a pool and up the path to the water below a high falls, still not believing it was actually safe and OK to slide down the hillside on rocks submerged in fast water.

I inched toward the water – the rocks alongside were slippery – not quite sure where I should enter the stream or what course to take.

Suddenly I slipped and fell, PLOP! into the water.

The rocks were smooth and I thought, What the hell! and plunged over the first falls.

Wow! Straight down and into a shallow pool.

I eased over to the next falls – and SHLUP over and out, and then down and around, and SPLASH!!!! into another pool. On and on it went, each turn and plop more fun that the next. The best was an area I dubbed The Chute, which had two parts. The first part was a very sharp, narrow curve that slammed you around a bend, so that your feet were higher than your body, and it guided you as you whipped around and down. Then followed by a longer passage that had S-curves, steep and very smooth, so that you whipped through it at breathtaking, out-of-control speed and smashed into a pool at the end.

The whole time I was laughing and unable to believe how much fun it was, and in the second part of The Chute, every time I went down it I would shout and scream and hoot with pure glee. It was outrageous! I don’t think I’ve had that much pure, bodily fun in 30 years.

It lifted me out of my body too … a chance to be a piece of flotsam in the stream.

The more you relaxed, the better it was. If you tried to control too much with your hands, you’d just get banged around, and if you stiffened your legs too much, you could get your foot wedged or hit your leg on the rocks.

In a couple places where the rocks were quite jagged, it was still fine if you just flowed over them fast and loose instead of trying to control the speed, for then it was bumpy.

The only twinge I had was when I thought of how I’d love to go down these rocks with my sisters and parents. It broke my heart that none of them might ever know the joy, the absolute joy, that I did – sailing down the rocks and clambering back up, free and laughing out loud in the sun.

The passage above is from my journal of the five months I spent in the South Pacific in 1996.

I traveled through six island nations to work with journalists on a Knight International Press Fellowship. On my one day a week that I didn’t work, I snorkeled and enjoyed the Pacific islands.

I took a break for the trip to Taveuni in October 1996. Though it was 20 years ago, the place is still clear and shining in my mind.

I wrote, ate, and watched the horizon from the little table and bench in the featured image above.

I had a tiny cabina, not much more than a straw hut with a sink and bunk beds, where I slept at night in the company of many, many spiders.

During the day I snorkeled for hours, wandering among coral and fish, confronting fears and swimming through them.

When I think of the places I have seen and loved in the world, Taveuni is one of the few that I still long to return to.

When I am trying to relax, it is a place I bring to mind.

I’d still like to go there and write a book.

The rock slide is call Waitavala Waterslide, and you can see more photos and a description at World of Waterfalls.

There is also a beautiful secluded falls on Taveuni, which you have to swim to get to. Read more about Wainibau Falls here.

A local guy kindly took a photo of me at those falls. 2 thoughts on “The rock slide on Taveuni”