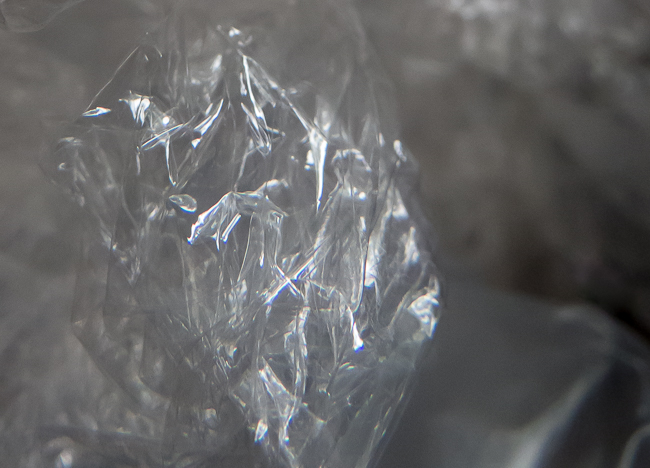 Once I got a mud wrap at a spa. Two people slathered a slippery brown mud mixed with herbs all over my body, and then wrapped me in cellophane.

After that, they swaddled me in a cotton sheet. I figured that was for pure aesthetics rather than any therapeutic reason, because who could relax when they’re wrapped in plastic wrap like a half-eaten burrito?

When our house got packed out, I noticed that the crew used huge rolls of cellophane wrap – to hold together the food processor parts, to keep monitor cords neat, to seal lidless boxes that held odd-shaped items, to keep drawers from sliding open on furniture.

Great for moving boxes, but when you are unpacking – like when you’re having a mud wrap – it’s ugly.

Packing tape is easy. One tug and you can ball it up and toss it like a basketball, or one slice and it’s dismissed as you fling open the box flaps.

Plastic wrap, not so much. It gets twisted, and it’s so closely engaged with the item it’s wrapping that you can’t carelessly slice through with a box cutter.

Today, inspired by my new lofty office, I found myself starting in on the plastic wrapped stuff that was still unpacked.

Then I thought of my boxes of fused glass waiting at the condo. Lightning bolt: Gotta draw designs for my glass projects. I need my pencils and charcoal and erasers and paper!

I attacked the two white drawer sets that contain my paper and art supplies. I unplasticwrapped them in one long, swirling, feverish fit and yanked open the drawers.

Paper pads had slid all around in the drawers but they were fine, they were alive, and so am I. Charcoal and pencils and erasers were in the 4th drawer down just like they have been for five years, waiting for me, and I scooped them up.

They felt so good in my hands.

I ran up the stairs with them. I wanted to shout, “LOOK LOOK LOOK PAPER PENCILS CHARCOAL!!”

Until that very moment of tearing the plastic wrap off the drawers, I had not realized how much I missed drawing.

They were freed from the plastic wrap, after a whole month of not even breathing, and almost a year of utter disuse because of drawing teachers who left me discouraged instead of inspired. I had tucked them away and focused on glass.

Today they were freed, and so was I.

The penny for this day is a 2013, the year I started drawing in earnest.