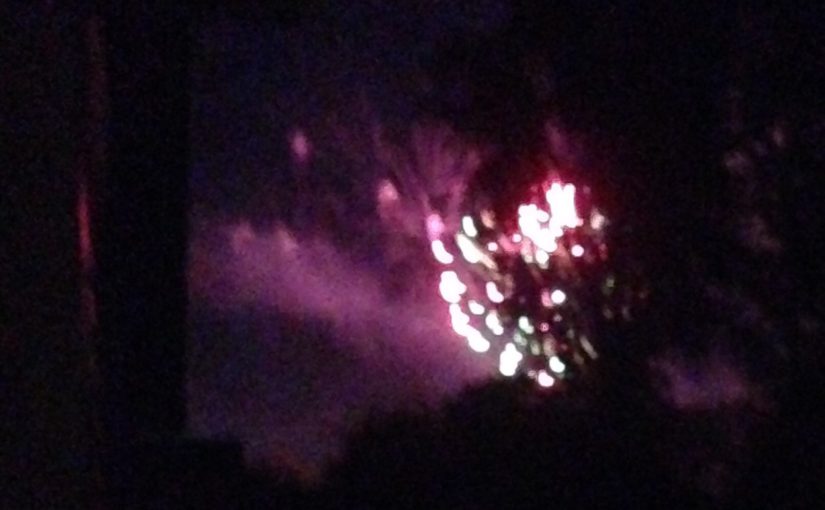 My big sister Ann was so excited to take me to my first fireworks display. I was almost two years old and I liked pretty things – she figured I’d love the sparkle and bright colors of the fireworks.

After the first few fireworks exploded, I began waving my hands to cover my eyes, and cried, “Don’t want! Don’t want!”

I learned to love fireworks because they came just three days before my birthday. I thought they were being shot off for me.

When I began to understand adult conversation, it seemed everything was like the fireworks. Noisy, dangerous explosions that were supposed to be about freedom. Vietnam, civil rights, women’s lib, environmental issues, anything that had to do with changes in American lives ended in arguments and shouting matches and people stomping off.

Noise disturbs me. Arguing upsets me.

I was still a sensitive little girl. I cringed and fell silent when the arguments started. I felt like throwing up my arms. Don’t want! Don’t want!

I feel that way again now, when I read discussion threads about the 2016 presidential election or immigration or gun control. So much shouting, so much noise, people stomping off.

Just fireworks. Everyone shooting their mouths off into the darkness, trying to be loudest and highest and most sparkly, fading in seconds, sparks evaporating before they hit the ground. Sometimes people get their hands blown off trying to shoot their own fireworks.

When we lived in Dubai, there were fireworks every day for 30 days during the Dubai Shopping Festival. We went up on the roof and watched. It’s pretty amazing to see firework displays every single night, and I relished it.

We noticed, though, that there was no real narrative arc to these displays. No pauses, no build-up, no grand finale. Just a lot of bang bang bang bang color and light, without a dramatic end.

Dubai is a shiny, exciting place, but it isn’t a democracy or anything close to it. We found it pleasant and easy to live there as foreigners, enjoying modernity without being required to participate in politics.

Without, actually, being allowed to participate in anything remotely political, including expression of an opinion about the UAE that wasn’t positive.

I still miss Dubai sometimes. Not on this holiday, though.
You can get tired of fireworks. Of noise and risk of injury. But you gotta have ’em.