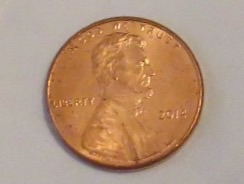 It’s a rare day that I don’t have a bruise somewhere on my body. Usually on my legs, but sometimes on my arms or hands.

No, I don’t have a Vitamin C deficiency, and no, I’m not being beaten. I just run into things – short tables, counter edges – or they fall on me, or some other clumsiness brings me into accidental contact with objects that have less flexibility than my skin.

I also have a tendency to bump into people. It’s an unusual outing when I don’t say, “Oh, I’m sorry!” or “Excuse me!” a couple of times to people who had the misfortune to be in my path.

Half the time I don’t know what caused the collision or the bruise. But, as Tom has observed, I seem to be inattentive to my body’s location in space.

I think it’s because I’m A) usually in a hurry and B) focused on my destination, rather than what is immediately in front of me. Not desireable traits.

I’ve tried to do better. Mindfulness meditation helps with this – when I remember to do it.

But today there’s a bruise on my hand, and I can’t even guess what it’s from.

I learned a term in coinage which seems appropriate here: a bag mark. It does NOT mean “a bruise that old bags get.”

According to the glossary pubished by the U.S. Mint, a bag mark is “a mark on a coin from contact with other coins in a mint bag.”

I would love to know how one can distinguish a bag mark from any other scratch that a coin gets during its passage from hand to hand – jangling in pockets, shooting down slots, dropped on the pavement, or churning through coin-sorting machines.

Frankly, this term strikes me as a way of sounding like an expert when you really have no idea what scratched the coin.

From now on, when someone gapes at my purple skin and asks, “What did you do?!” I’m going to tell them breezily, “Oh, it’s just a bag mark.”

Today’s coin is a 2014 with miniscule scratches and flaws that may or may not be bag marks.