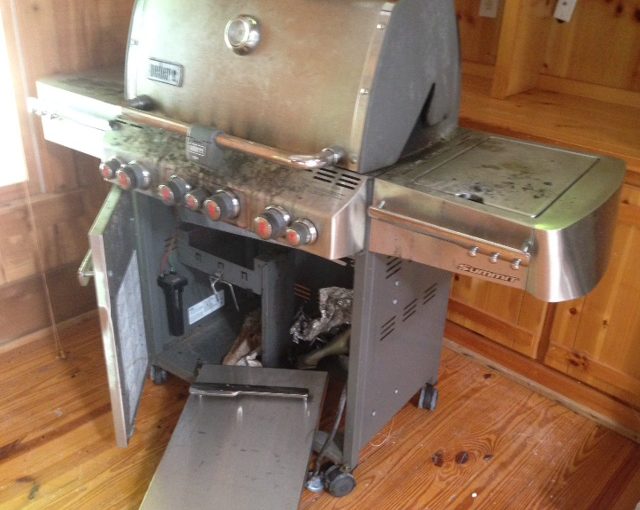 I’ve been back to the house a half-dozen times now, maybe more. Each time there is some other small thing to gather up. Fragments of the life of this house.

The packers, who wrapped, boxed and inventoried every single item in the entire house before carting it off to storage, randomly left little pieces.

They inexplicably left a couple sheets of film negatives lying on the floor in my office. They forgot on the bookshelf the small wooden base that my emerald green cloisonné vase from China sat on. They missed a shelf full of vinegars, oils and sauces in the kitchen.

They assumed the sheets of clear plastic that I hastily draped over the recliner to protect it from further debris belonged to the emergency services guys.

They put the grill in the living room because they don’t take out any trash – the grill was damaged beyond repair when the tree hit the deck, but I can still recover the propane tank from it.

A tarp covers the whole back side of the roof. Looks like a burqa. I roam from room to room. The house is empty except for these remnants.

No comfort – no recliner, no bed, no art.

Fade marks on the bedroom floor.

The house has never been this empty since it was built.

When we bought it, the previous owners had left a carpet, some baskets and towels and fixtures, a few sticks of furniture. We were waiting for our own furniture and belongings to arrive by ship from Dubai, so we asked that all of those remnants be left by the owner. We didn’t move into an empty house.

Now it is down to just its bare architecture.

The house feels indifferent to my presence.

It is silent, awaiting the renovation. It will become something else, for someone else. A new house, for the new people we are becoming.

Meanwhile, I have to sweep up the remnants.

Today’s penny is a 1999, the year that construction began on this house.