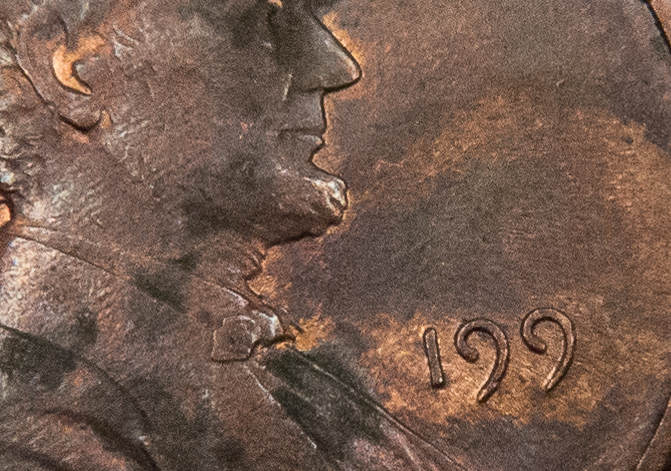 Often it’s hard to see the date on coins, even with a loupe or a magnifying glass. Dirt, scratches, corrosion, all marr the surface.

But out of the 1,200+ pennies that I have already sorted, only a half-dozen have been outright unreadable.

Then I found this one.

At first I thought perhaps the date had been scratched out, but overall this penny is in very good condition. It is from 199-. From a slight distance, it appears like there might have been a 1 in that last spot. But if you look very very closely, the “shadow” of the number is only part of the corrosion pattern. In terms of embossing, there’s just nothing there. Only the ghost of the intent of a number.

Errors are usually what makes a coin rare, and therefore valuable. According to the forums at Coin Talk, though, this particular flaw is worth nothing. I was very surprised to learn that a dropped digit is not that unusual in coinage.

Apparently it often happens because of grease that accumulates and fills in the digit. Coin collectors call this a “greaser.”

It reminds me of memory… how it fills in and around pain, obliterating it.

The first eight months of 1991 were very painful for me, personally and professionally, for many reasons. But when I think of that year now, what comes to mind is the last four months, when I lived in China.

Time has filled in the dark months. And made 1991 a “greaser” … easing the way to carry on with life, by erasing the bad and embossing the good.