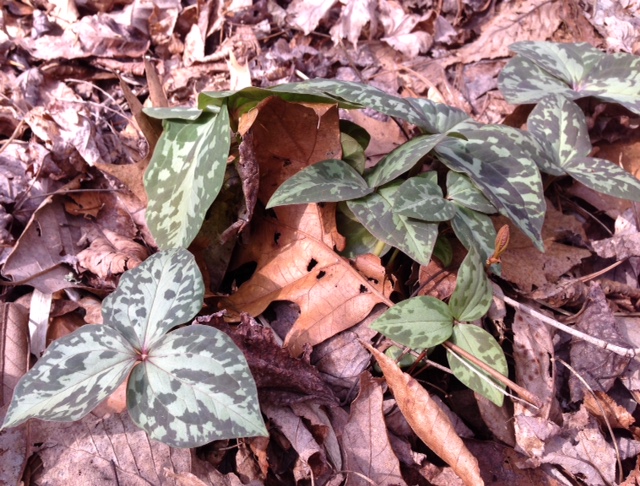 The weather’s been delightfully sunny, for March – 70s and even low 80s. The flowers jumped right up, fruit trees burst into blossom, and the carpenter bees began their war dance of mating – a full week or more before the official start of spring. I am astonished that it’s so warm I need to keep open the windows even at night.

Is something wrong here?

Early spring makes many of us nervous. Are we going to have a failure of the fruit crop after a late frost kills off all the blossoms? Is this global warming in action, because it has never before been like this in early March!

More importantly: If I put my winter clothes in storage now, will I be sorry?

I don’t rely on my memory these days. I turn to the source I trust: my naturalist notebook.

Since 2008, when Tom and I took a Master Naturalist course offered through University of Georgia’s Cooperative Extension, I have kept notes about the first sightings of the wildflowers and insects.

I just took a look at my notebook, and guess what? This is not a particularly early spring for blossoms.

The ones I’ve spotted this week – toadshade trillium, rue anemone, Bradford pears, bluets, downy yellow violet – were up between Feb. 23 and March 18 in 2012, and early to mid-March in 2009.

The yellow pine pollen is sometimes dubbed “the April 10 pollen” because it falls so predictably around that date each year. This year, it was dusting the car by March 15. In 2012, it covered the car by March 19.

Some weather forecasts are predicting snow tonight. It seems impossible with all these fruit trees blooming.

The vagaries are the season. Not the whole story.

Climate change is real. You won’t find its evidence from a lone naturalist notebook, nor from the faulty memories of a thousand old-timers.

Spring is also real. I have the notes to prove it.

Today’s penny is a 2012, the other one declared as an “early spring.” Carpenter bees got to the house March 17 that year. It was March 10 this year.

2 thoughts on “The early spring”