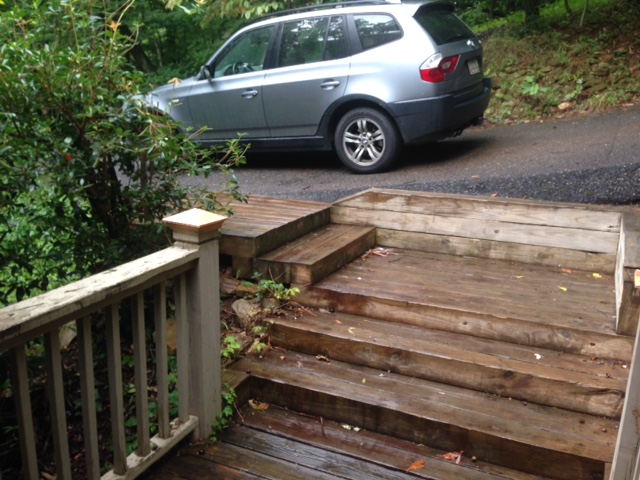 The wooden stairs in the physical therapy room at the rehab hospital were on a platform, with a landing in between two sets of steps. About six steps on the steep side, and maybe ten on the set with a gentle slope. The handrail was wood, on both sides of the stairs within easy reach.

Tom used these practice stairs a half-dozen times during his last week of therapy in the hospital. So, when I was screening potential houses to rent, I said we preferred no steps, but up to six would be OK. I specified that we needed a living area, master bedroom and bath on the main floor.

I forgot one important detail. It made our day of looking at houses a strenuous workout for Tom.

The first house had about four steps from walkway to front door, but they were shallow, which allowed no room for Tom to place his hemi-walker. It also had a long, sloped walkway from the driveway which was bumpy from the upheaval of tree roots. Getting to and into this house, and back to the car, required a sweat-breaking and perilous effort. Tom managed it with intense concentration and a little support from me.

House #2 fortunately only had one step onto a wide porch; the path to it is on flat stones; but the front glass door is heavy and would swing shut on Tom if I didn’t hold it open. It’s comfortable and cozy, but the laundry and half the living space are in a loft with steep steps.

House #3 has just a small step in front, and no step from garage to main floor. Tom breezed through that. The wide-open spaces between furniture made it easy to navigate, and the open floor plan puts most living space on the main floor.

The fourth house had no steps, just a wooden walkway from parking pad to front door. That was the only one with no steps. Except indoors, of course. It will be many weeks of therapy before Tom would be able to even attempt to go down those steep stairs to the other rooms.

House #5 had just two steps at the front door, on a fairly level pathway, and only one short step from garage to main floor. The owner told us that her husband had had a stroke, so she ensured there were no obstacles for him. Downstairs is inaccessible, though.

Then we stopped at our house so that Tom could see the damage from the tree that fell on it.

Entry to our own house was by far the hardest.

The driveway is sloped and uneven and littered with pignuts that are as round and hard as large marbles. There is a wide landing from the driveway with two steps down, another landing with a turn, then three steps down to the front porch.

Tom was already tired from the activities of the day; he knew he had to be extra careful. He thinks about each step before placing the walker and each foot.

One step at a time.

His practice in rehab was without a walker. Going up the practice stairway, he placed his stronger, left foot first, then his weaker right foot, holding the rail with his left hand. Going down, he places weaker foot first, then stronger, holding the handrail. Both feet on one step at a time. Handrail on both sides within easy reach. He does not stumble and he has never fallen.

Important detail: There was no handrail at any of these houses. Including ours.

Many of the houses in our rural community were built before building codes were in place, in the late 1990s. Enforcement was lax even at that.

Because it’s a resort in the forest, our community’s architectural guidelines about color, building materials and design were strictly enforced. But nothing in them requires handrails.

If you’re buying or building a house, make sure you give a helping hand for the world to beat a path to your front door.

Today’s penny is a 1999, the year that the plans for our house were approved.

2 thoughts on “A helping hand”