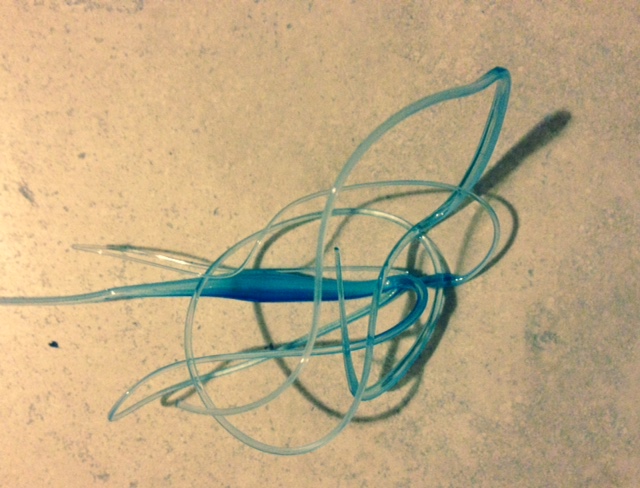 As I drove down the main road away from home, I braced myself for a lot of driving. Today was a long day full of errands and medical appointments.

The car in front of me was going slower than I wanted it to, and I was annoyed.

There was a sudden, brown blur. A hawk landed on a snag next to the road.

I stopped the car and just looked at him, while the slow-poke ahead of me drove on, oblivious. “A hawk! A hawk!” I yelled, as though the driver could hear me.

Hawks are not a rare sight up here. A few weeks ago, a hawk flew straight across my hood, so close that I could see the mouse dangling from his talons. I see them flying in the distance fairly often.

But it’s unusual to have one light on a tree right next to road, and sit there while you watch.

By the time I stepped on the gas again, I was aligned with the hawk and his statuesque pose, and unperturbed by any slow drivers. The prey, if they’re slow, are easier to catch.

Driving a little more slowly, I noticed the mossy, rocky walls that border the road into town were adorned with curtains of icicles. They caught the sun and streaked it down to earth with their glimmering two- and three-feet bodies.

Then, coming around a curve, I surprised two bluebirds, who tittered and flitted among the bare branches. The bright color of their wings hovered there in the tree and in my eyes, and their dance stayed with me, making me laugh.

The rest of the day flew by. I found myself, hours later, picking out pieces of scrap art glass to buy for my next round of fused glass art.

When I make my next fused glass pieces, I’m going to stick with the abstract and just play.

But the bluebirds and icicles will be there. Just watch.

Today’s penny is a 2012. The wingspan of an Eastern bluebird, which lives in Georgia year-round, can be 12+ inches.

4 thoughts on “Bluebirds and icicles”